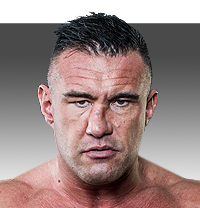 Jerome Le Banner is one of the hardest-hitting fighters ever to step between the ropes. More than 75% of his fights have ended with the opponent unconscious or otherwise unable to continue.

At first glance Le Banner looks almost barbarian - a huge slab of muscle with a mean face on it. Though he does tend to get into brawls, Le Banner is actually an intelligent fighter who first came into martial arts via studying the Jeet Kun Do philosophy of Bruce Lee.

It was because of his JKD roots that he switched to a southpaw stance early on. Bruce Lee advocated that fighters should lead with their strongest hand and so Le Banner stands right-side forward even though he is right handed

Because of this, he has a seriously heavy lead jab and a crushing left cross to follow it, making him dangerous with both hands. Le Banner’s cross became known as ‘The Golden Left’ during his time fighting in Japan.

In his K-1 years, Le Banner was by far one of the most popular fighters on the roster. His do-or-die style created some of the sport’s most memorable moments and now he continues his work as part of the GLORY World Series heavyweight division.