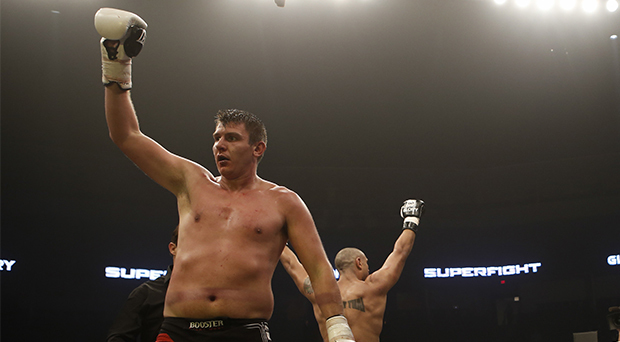 Verlinden: “Myself and Artem Levin are the contenders at Middleweight”

Filip Verlinden (41-11-1, 16 KO's) is in a unique position when it comes to placing a bet on the upcoming fight between Tyrone Spong and Saulo Cavalari.

Spong and Cavalari are facing off in the first semi-final match of the GLORY 15 ISTANBUL Light-Heavyweight Championship Tournament on Saturday April 12 and Verlinden has previously faced both.

“I think Spong is going to win. He’s going to have the upper hand. He is too experienced, too strong for Cavalari,” says ‘The Belgian Bull’.

Verlinden fought Spong in the GLORY 9 NEW YORK Light-Heavyweight Championship Tournament and was Cavalari’s debut opponent in that same weight class. Now, at long last tired of being outsized by his opponents, he is preparing to debut at middleweight.

Just by looking at him you can see that Middleweight (187lbs/85kilos) is clearly Verlinden’s natural weight class.

So it is remarkable that for much of his career he was competing as a Heavyweight. He then dropped to Light-Heavyweight and is now finally completing his return to the division he started in.

“I started my career around 80 kilos, 85 kilos but back then there were no fighters in that division. The only good fighters were at heavyweight so everybody decided to move up to heavyweight; I did so too,” he explains.

“In my eyes the 85 kilo division wasn’t so [stacked] then. But now its a very nice division. I’m going to come off better in the Middleweight division. I think this is more my natural weight for me.”

Like all elite fighters, Verlinden has a burning desire to be a champion and he thinks Middleweight is the category in which he will achieve that dream.

“The top guys are Artem Levin and I think Sahak [Parparyan], Joe Schilling…. They are all good guys. It is a strong division so it is an honor if you become champion there,” he says.

However, he doesn’t put too much store in Schilling’s winning of the GLORY 10 LOS ANGELES Middleweight Championship Tournament.

“I don’t rate Joe Schilling the #1 champion right now, in my eyes. Maybe in a year Filip Verlinden is the champion. And Artem Levin, I think we are the two big contenders at 85 kilos.”

However, Verlinden does have a lot of respect for the level of talent he is seeing in the USA these days. America has traditionally lagged behind Europe and Japan when it comes to kickboxing talents but that is changing fast.

“I predict that in a year or two there is going to be a strong breed of American fighters. You can see in all different sports that they focus on the sport, learn about it, and I am sure that there are going to be a lot of good fighters,” he says.

“I saw a lot of good talent in kickboxing from American fighters already so I think they are going to become top contenders.

“American fans are the greatest things to fight for. They are very respectful and they treat you very good. The crowd is nice, its a nice country, it’s the greatest country to fight in.”

No doubt Verlinden will find himself fighting on US soil once again before the year is out. In the meantime, his next bout takes place in Turkey as he makes his Middleweight debut and welcomes Israel Adesanya (31-1-0, 14 KO's) to the organization.

“I’m fighting Israel Adesanya from New Zealand. He is a newly-signed guy by GLORY. A big talent, he has an awkward style,” he says.

“You never can predict a fight but I am going to put a lot of pressure on him and fight for my life.”

GLORY 15 ISTANBUL takes place Saturday April 12 in Istanbul, Turkey and airs in the US on SPIKE TV.