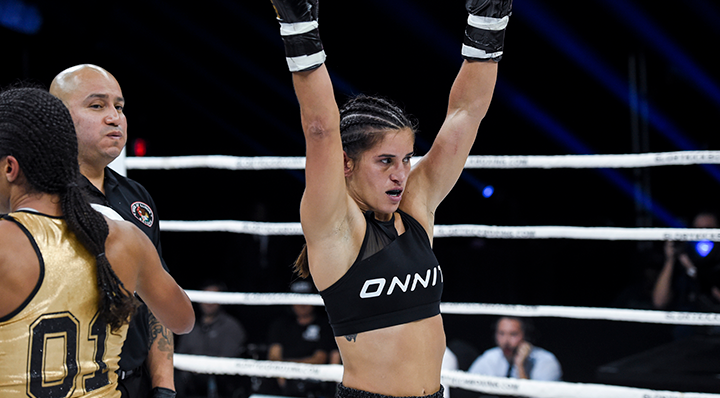 GLORY 71 touched down in the Windy City for the first of back-to-back events on Friday, Nov. 22. The night’s main event featured the third meeting between two of the world’s best as women’s super bantamweight champion Anissa Meksen (99-5, 32 KO’s) faced former champion Tiffany van Soest (21-4-1, 6 KO’s). France’s Meksen defeated van Soest in both of the pair’s previous meetings, including their title clash at GLORY 64 in March.

Van Soest fired a superwoman punch at the opening bell. Meksen clinched and scored with a short knees. A left hook from Meksen landed, prompting van Soest to fire a spinning backfist that missed the mark. Meksen controlled range with her kicks, evading the strikes of the American. Van Soest missed with a spinning back kick and was kicked clean in the hamstring by the champion. A head kick from van Soest landed as Meksen came forward. A straight right hand from Meksen caught van Soest clean late in the round.

The second stanza saw van Soest look to land a spinning technique once again, but Meksen was wise to it. As Meksen attacked with clean combinations, the challenger looked for openings for the flashy techniques. Van Soest caught Meksen with an elbow on a backfist attempt and the fight was paused for a moment. Meksen landed a straight right when the fight continued. Van Soest went back to the well with the spinning backfist, but Meksen countered it with a right hand.

Meksen landed with inside low kicks to start round three. Van Soest connected with a right hand as she stepped into boxing range. A left hand from Meksen appeared to surprise van Soest and forced her to clinch. A step-in knee from van Soest found the body of Meksen. A counter left hook from Meksen caught van Soest clean on the jaw. A mouse began to form under the right eye of Meksen as the round came to a close.

Van Soest mixed up her attacks early in round four, controlling the range and keeping Meksen guessing. The straight punches of Meksen continued to land. Another spinning backfist attempt from van Soest landed with the elbow, prompting a warning from the referee. The pair traded single strikes for the remainder of the round.

Meksen came out firing combinations in the final round. Van Soest stayed light on her feet and landed from range. The pair clinched and exchanged short knees. A right hand from van Soest got through the guard of the champion. Van Soest was warned for a third errant spinning backfist attempt, but the referee did not deduct a point for the strike. The pair battled hard until the final bell, but the judges would be called upon to decide the fight.

The judges rewarded van Soest for her efforts, making her a two-time champion.

“Patience and persistence pays off. I’m at a loss for words. I’ve worked hard for it,” said van Soest. “Thanks to Anissa for bringing out the best in me. If she wants to do it again, let’s do it.

“I’m here to tell people that I’m just getting started. This is just the beginning.”