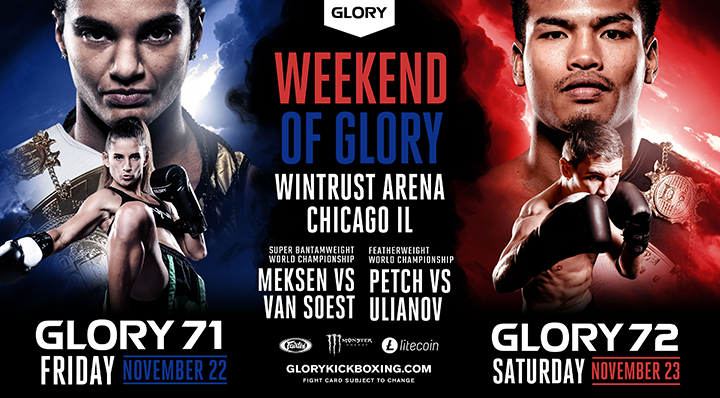 LOS ANGELES - Fifty-two of the world’s top professional fighters will converge on Chicago next month for the biggest fight event of the year.

The Wintrust Arena will host GLORY 71 on Friday, November 22 and GLORY 72 on Saturday, November 23 in an action-packed double-header.

Two world titles will be contested during the ‘Weekend of GLORY’ as Thai prodigy Petchpanomrung 163-36-2 (27 KO’s) travels from Bangkok to put his featherweight title on the line against Siberia’s Alexei Ulianov 29-6-1 (7 KO’s) and California’s Tiffany ‘Time Bomb’ Van Soest 20-4-1 (6 KO’s) seeks to snatch the super-bantamweight title from the seemingly-unbeatable Anissa Meksen (99-4, 32 KO’s) of Paris, France.

Each card will host thirteen fights, making for a total of 26 bouts taking place across the two dates. The line-up reflects the diversity of the host city, with fighters traveling from Russia, Poland, Ukraine, Brazil and even Uzbekistan.

Friday’s GLORY 71 card will also host Romanian heavyweight Benjamin Adegbuyi (33-6, 19 KO’s) as he takes on Curacao’s D’Angelo Marshall 20-4, 11 KO’s). Adegbuyi knocked Marshall out in just 36 seconds at GLORY 50 CHICAGO last year. Marshall wants to avenge that loss in the same city in which he suffered it, but Adegbuyi has promised him this second fight will be even quicker.

“Chicago is a special place for GLORY. This double-header weekend will bring our total number of Chicago events to eight, more than any other city in the US. The fans here are great and Chicago has become something of a home base for us in America,” said Marshall Zelaznik, GLORY CEO.

“We wanted our final US event of 2019 to be a big one and Chicago was the obvious choice. But when the Wintrust Arena told us that both the Friday and the Saturday night were available, we started thinking if we could take things to another level by making this a double-header.

“‘It’s taken a lot of work from everyone but we’re pleased to be able to stage our final US event of the year in such a remarkable way and we’re bringing two great cards to the Wintrust for this ‘Weekend of Glory’.”

As well as Individual tickets for each of the fight nights, GLORY has also put together a unique 'Weekend of GLORY Pass' which secures entry to both events at 25% less than the cost of individual tickets.