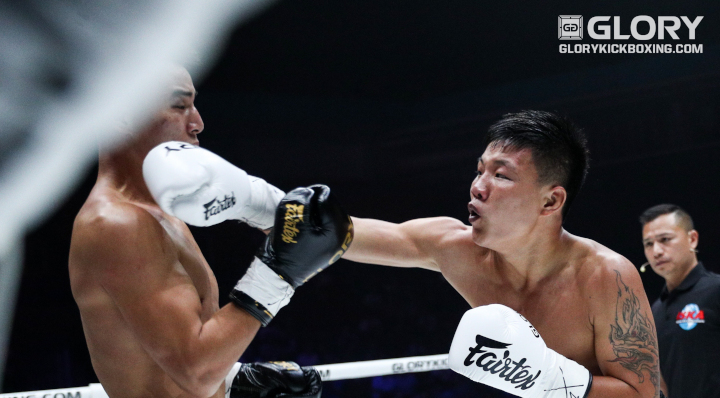 GLORY’s return to China for its 57th event included a one-night, eight-man lightweight tournament featuring many of China’s most promising young kickboxers. And when the dust settled, it was 20-year-old Liu Xu who walked away with the tournament crown.

The tournament final featured the tournament’s youngest fighter, Liu Xu, against its most experienced, Wensheng Zhang. Xu wasted no time going after the damaged rib cage of Zhang with punches and kicks. Zhang looked to power forward and clinch, forcing Xu to the ropes. Xu went back to attacking the body of Zhang before going upstairs with punch combinations and a high kick.

The punch output of Xu was nearly double that of Zhang in the fight’s middle stanza. The pair clinched more frequently as fatigue started to set in, but Xu continued to pepper Zhang with punches and knees. The toughness of Zhang was put to test as the younger Xu continued his attack.

By the time the final round began, it was Xu’s fight to lose. Zhang dug deep, scoring with low kicks, but it was simply too little, too late for the veteran fighter. Xu never let up, firing punches to the final bell to seal the fight and the tournament. Four of the judges gave him every round, with the lone dissenter rewarding Zhang’s resiliency.

In the second semifinal match-up, Wensheng Zhang clashed with Li Deng. The height and reach of Deng was apparent from the opening bell and he worked at range early in the fight. He attacked the body of Zhang, but was countered with a big left hook from the more experienced Zhang.

Zhang scored with a spinning attack to the body of Deng that slowed his forward advance. The pair traded body kicks, but Zhang began to use his punches to turn the momentum in his favor.

The volume of Deng faded as Zhang increased his pressure and scored with strikes inside boxing range. The body of both fighters showed damage late in the fight, but it was Zhang who was less impacted by the strikes. He outworked Deng over the final minutes of the bout, doing just enough to convince the judges and earn a spot in the final.

The first half of the semifinals pitted Liu Xu against Chao Wang. Xu threw with volume early, scoring punch combinations and body kicks. Wang answered with punches, but struggled to match the output of his younger foe. Xu used his low kicks and knees to the body to outwork Wang.

The pressure of Xu was a factor as the fight progressed, as he stayed in the face of Wang and delivered crisp combinations and high kick attempts. The fighters bit down on their mouthpieces in the final frame, throwing wildly.

Wang landed a big knee, throwing Xu off balance for a moment. He quickly recovered and went back to firing strikes in the pocket. The fight saw the scorecards and Xu took every round of the fight from the five judges at ringside.

In the final bout of the opening round, the tournament’s most experienced fighter, Wensheng Zhang (43-5, 10 KO’s), faced off with Lei Feng (12-5, 7 KO’s). Zhang threw with punch combinations in the fight’s opening minute, but changed to his kicking arsenal soon after.

Feng looked to counter off the kicks, landing straight punches. The forward advance of Zhang largely stifled the offense of Feng in the middle of the fight. Zhang was relentless with low kicks.

When Feng was able to maintain his range, he found success with his hands. The pair continued to battle in the third round, with both fighters finding openings for combinations. Feng was aggressive, seeking a finish, but it never came. The more experienced Zhang took the fight on the scorecards and earned the final spot in the semifinals.

The third quarterfinal match-up pitted Li Deng (27-8, 8 KO’s) against Alimjan Tursun (16-4, 5 KO’s). The pair exchanged hooks early, before Deng started attacking the legs of Tursun. A heavy kick sent Tursun to the canvas just a minute into the fight.

Once Deng recognized the weakness in Tursun’s defense, he exploited it. Deng went for the finish, throwing combination after combination. Deng earned a pair of knockdowns in the final minute of the round to earn the TKO win and claim a spot in the tournament semifinals.

Battling for the opportunity to face the victorious Liu Xu in the semifinals, Chao Wang (17-7, 5 KO’s) took on Tiehan Xu (18-4, 6 KO’s). Wang and Xu started off with a battle of close-range boxing, with each attacking one another’s body. When distance presented itself, Xu looked to kick.

Wang wanted no part of it, closing the distance and delivering knees to the body. After trading inside low kicks, Wang continued to stay busy with his hands. A head kick from Wang was partially blocked by Xu, who smiled at the crowd’s gasps.

The pair exchanged combinations in the center of the ring for the majority of the second round. Wang pushed the action in the last round, forcing Xu to backpedal. Xu tried to answer late in the fight, but he could not match Wang’s power or aggression. Four of the judges saw it for Wang, who moved on to semis.

The night’s tournament action kicked off between 20-year-old Liu Xu (17-4, 6 KO’s) and Junchen Zhao (20-3, 9 KO’s). Xu frequently used his speed to get inside the reach of the taller Zhao. Zhao tried to fire over the top and pair exchanged outside low kicks. Blood leaked from Xu’s nose, but he never stopped coming forward.

Xu had to be warned for attempting trips when Zhao clinched with him along the ropes. When the pair did separate to boxing range, Xu’s punches were the most effective strikes.

Zhao looked for spinning attacks late in the fight, but Xu countered them with more punching combinations. That would prove to be the difference on the scorecards, as Xu advanced with the decision win.