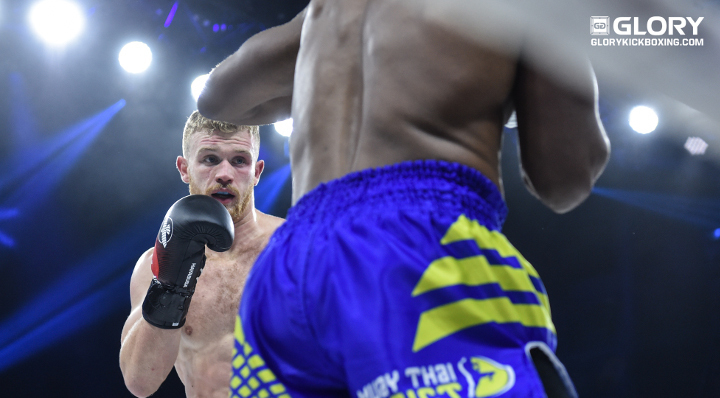 A thundering overhand right sealed victory for Robert Thomas in the final of the GLORY 48 NEW YORK Middleweight Qualification Tournament.

The Canadian middleweight let fly with a thundering cross just over a minute into the third round, just as Lemaire was in the process of throwing a rear uppercut. Thomas beat him to the punch, his blow cannoning through Lemaire’s exposed guard and dropping him.

Lemaire spun as he fell, ending up face down with one arm hanging on the bottom rope. Thomas turned and walked away as soon as the blow landed, certain that Lemaire - who also suffered a knockdown in his semi-final fight - would not be getting up.

The knockout blow put the finishing touch on a fight which Thomas had increasingly been controlling, a close first round giving way to a second round in which Lemaire began to fade while Thomas increased the pace and pressure.

Thomas now has three wins from his last three fights, two of those being by stoppage. He recently began training with former welterweight champion ‘Bazooka’ Joe Valtellini and credits his recent improvements to that relationship.

It was not the first time Thomas and Lemaire had fought: they clashed back at GLORY 18 OKLAHOMA in 2014, where Thomas also scored a win by way of third-round stoppage. Lemaire was very keen to score revenge in New York but instead met the same fate; however, he will surely welcome a third attempt at Thomas if the opportunity ever arises.

Lemaire booked his spot in the final by way of an exciting four-round Californian civil war with Matt Baker. It was a So-Cal vs. Nor-Cal battle, Lemaire fighting out of San Diego and Baker representing the Bay Area.

As expected, there was little in the way of a feeling-out process. The two large middleweights just moved straight into exchanging fire and didn’t let up. Advantage traded back and forth, but Baker looked to have the fight in the bag when he scored a knockdown with a knee strike in the second round.

Lemaire gritted it out though and came back strong - so strong, in fact, that even though Baker got a 10-8 for the round in which he scored the knockdown, after three rounds the judges had the fight as a draw. Things went to an extra round and the action was frantic before Lemaire edged it and got the nod from the judges.

In the second of the evening’s semi-finals Thomas took a unanimous decision win over Wayne Barrett, although the result does not at all reflect the closeness of the fight. Barrett in fact looked to be having the better of things in large parts of the fight, until suffering a knockdown in the third round. That sealed his fate on the scorecards, but he had a good showing and