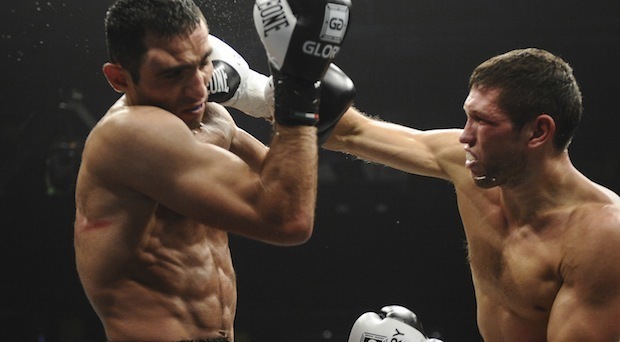 Russia’s Alexander Stetsurenko (49-8, 24 KO’s) has been added to the lineup for the four-man Welterweight Contender Tournament taking place at GLORY 19 on Friday, February 6.

He replaces Murthel ‘The Predator’ Groenhart in a semi-final bout against Nieky ‘The Natural’ Holzken (84-11, 44 KO’s) after Groenhart was forced to withdraw from the fight for medical reasons.

“We were sorry to lose Groenhart from the tournament but he was not able to take part on this date, so we look forward to seeing him again in the future when he is ready to return. In the meantime we have an excellent replacement with Stetcurenko,” said Cor Hemmers, GLORY matchmaker and CEO.

“He is probably best known for his three fights with countryman Artem Levin, now the GLORY middleweight champion. He is 1-1 in the GLORY welterweight division so far and is looking to make a statement in this fight with Holzken.”

It will be Holzken’s first fight for GLORY since winning the welterweight tournament at GLORY 13 TOKYO in December 2013. After the tournament he suffered shoulder problems from an injury sustained in a car accident and had to take the first half of 2014 off.

In the second half of the year he came back with two professional boxing matches, winning both by stoppage, and a ‘tune up’ kickboxing match which took place in Turkey on Christmas Day and ended with a first round win.

The other semi-final of the GLORY 19 Welterweight Contender tournament has Raymond ‘Real Deal’ Daniels - coming off his ‘Knockout of the Century’ win over Francois Ambang - facing the aggressive Brazilian prospect Jonathan Oliveira.

The two winners of the semi-final matches will then square off in the tournament final, with the winner of that fight going forward to challenge welterweight champion ‘Bazooka’ Joe Valtellini for his title later this year.

GLORY 19 takes place Friday, February 6 and airs live in the US on Spike TV and in Canada on The Fight Network. The show airs in 140 territories worldwide, either live or on tape-delay; check local listings for details.