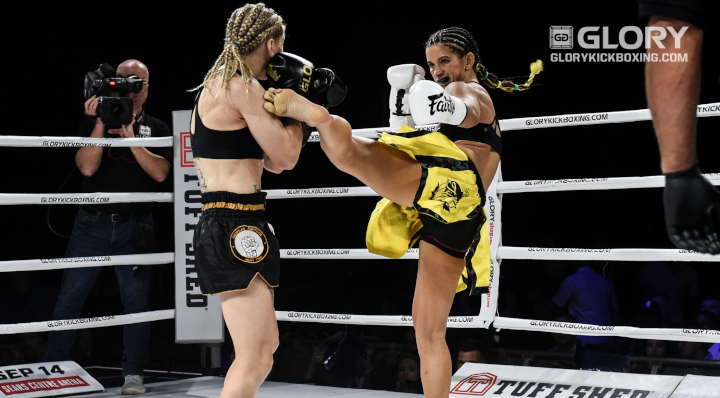 Former super bantamweight champion Tiffany Van Soest (18-3-1, 6 KO’s) returned to the GLORY ring on the GLORY 55 SuperFight Series, welcoming Sweden’s Sofia Olofsson (47-7, 21 KO’s) to the promotion.
Olofsson, who entered the contest riding a 26-fight winning streak, opened with a barrage of kicks. Van Soest used her boxing and footwork to counter the Swede’s forward advance.
The former champion frequently landed to the head with punches, but Olofsson appeared unfazed as she delivered a left body kick with regularity.
In round two, Van Soest continued to land with punches. Olofsson initiated the clinch and scored with short knees.
As the pair separated in the middle of the frame, Van Soest delivered an unexpected left head kick that wobbled Olofsson for a moment. The Swede rebounded, walking forward and again attacking with her kicks to the body.
The forward pressure from Olofsson was the story early in the third stanza. She marched ahead in a straight line, as Van Soest looked to angle away.
The body kick of Olofsson was relentless, as she looked to cut off the ring. The fight finished in the center of the ring with both fighters exchanging, hoping to convince the judges to hand them the win.
When the scorecards were read, it was Van Soest who left with the narrow decision victory.
“That was just my warm-up,” proclaimed the former titleholder Van Soest. Addressing champion Anissa Meksen, “You’ve got something that belongs to me!”
Tiffany Van Soest def. Sofia Olofsson by split decision (29-28, 28-29, 29-28)