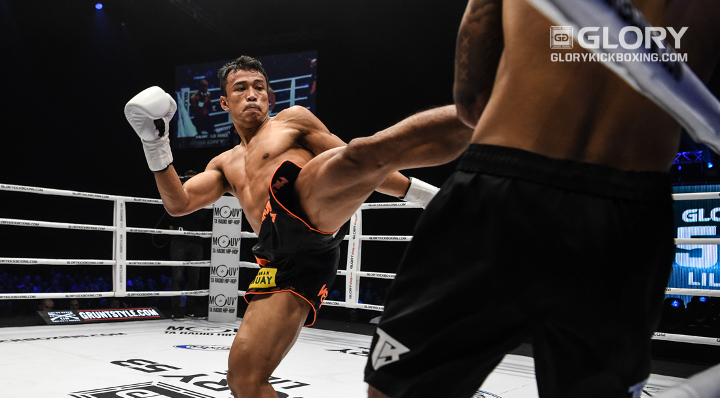 Sitthichai Sitsongpeenong retained his world lightweight championship in the GLORY 53 LILLE main event, but was challenged by Tyjani Beztati to a greater degree than he expected.
If anybody thought Beztati was going to be overwhelmed by Sitthichai’s name or the sense of occasion, they were proven wrong almost the instant the GLORY 53 headline fight started.
The talented youngster came to the ring with complete self-belief and went on the attack as soon as the opening bell sounded.
In fact Beztati won the first two rounds according to most of the judges, landing with punches and knees to get ahead on the scorecards early.
Beztati continually circled to his left, away from Sitthichai’s power southpaw kick, which helped him avoid taking the kind of body damage which previous Sitthichai opponents have suffered.
Once Sitthichai started figuring Bezati out though, the fight turned more in his favor with each passing minute. Beztati’s range and mobility worked well for him but Sitthichai started clearly outlanding him.
After five rounds the judges were unanimous in giving him the victory. He retains his lightweight title and now turns his attention to a showdown with Marat Grigorian in August in China.
Sitthichai Sitsongpeenong def. Tyjani Beztati by unanimous decision (48-47, 48-47, 49-46, 49-46, 50-45)