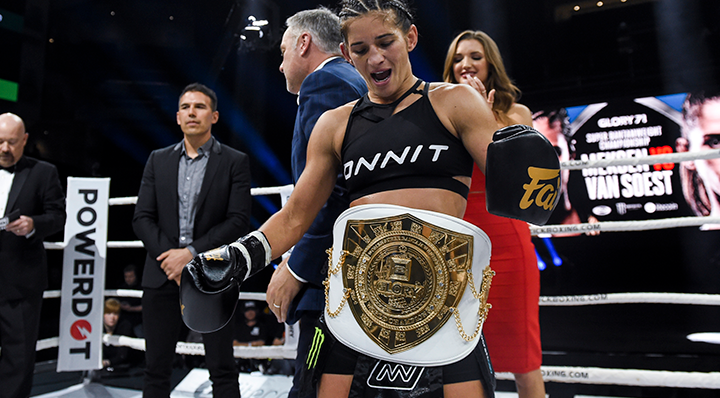 Return of a Queen: Van Soest regains title at GLORY 71

Van Soest (21-4-1, 6 KO's) became the the inaugural GLORY women’s champion in December 2016 when she won the Women’s Super-Bantamweight Grand Prix, but then lost the belt to Anissa Meksen a year later.

An attempt to regain the title from Meksen at GLORY 64 earlier this year fell short, but Van Soest beat Jady Menezes thereafter and stayed in the #1 contender position, which presented her with an opportunity to face Meksen for a third time.

With Meksen (99-5, 32 KO's) having won of their previous encounters, oddsmakers favored the Frenchwoman to retain the title and close out the trilogy with a perfect 3-0 run. The victory would also have been the 100th of her professional career, a landmark in itself.

Instead Meksen encountered a resurgent Van Soest, who had relocated to the Netherlands for much of her training camp in order to shake things up and get some new input. The benefits were clear early in the fight as she was able to pressure Meksen in ways she had not been able to in their preceding encounters.

The fight was not without controversy -Van Soest was faced with the threat of a point deduction for catching Meksen with an elbow on three separate occasions while attempting to land a spinning back fist.

Had a deduction been implemented, the fight would have resulted in a Majority Draw and the belt would have stayed with Meksen. But the infractions were not felt to be intentional by the referee and Van Soest was not censured. On the strength of her efforts over five rounds, the judges were unanimous in declaring Van Soest the winner of the fight and the new world champion.

Meksen, furious, stormed out of the ring and into the backstage area, where she completed her post-fight medical and then quickly left the arena. She had been certain of winning this trilogy fight and declaring total victory her rivalry with Van Soest. Instead a fourth encounter between the two now seems almost inevitable.

In the co-main event, Benjamin Adegbuyi (33-6, 19 KO’s) won his rematch with D’Angelo Marshall (20-4, 11 KO’s) to stand 2-0 over his heavyweight rival, although this encounter was a close one and bore no resemblance to the 36-second knockout defeat Adegbuyi inflicted on Marshall back at GLORY 50.