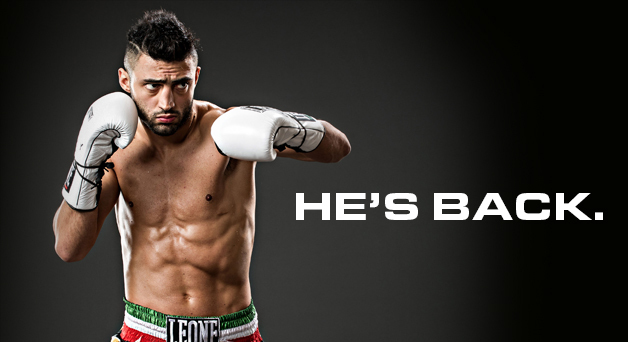 ‘The Doctor’ Giorgio Petrosyan has set his sights on the GLORY World Lightweight Championship.

Petrosyan (78-2-1, 35 KO’s) was yesterday confirmed for the headline slot of GLORY 25 MILAN, which takes place Friday, November 6 in the Italian capital city and which will mark his first fight in the GLORY ring since his shock exit from the GLORY 12 NEW YORK lightweight tournament at the hands of Andy ‘The Machine’ Ristie.

It was the only stoppage loss of Petrosyan’s career - indeed, one of only two career losses and the only loss he does not dispute. Injury was added to insult when it became clear he had badly damaged his hands during the November 2013 encounter, leading to surgery followed by a long period of inactivity.

Petrosyan was away from the ring for the whole of 2014 but returned in triumphant fashion in January this year with a win over experienced Turkish lightweight Erkan Varol. He followed that in April with a victory over the excellent Enriko Kehl, the current K-1 MAX champion, and in August he beat the former WMC champion Xu Yan in his native China.

Giorgio Petrosyan is back.

“I think that after my victories against K-1 world champion Enriko Kehl in [top Italian organization Oktagon] and against the ‘Hero Legend’ [organization] champion Xu Yuan in China, nobody can have any further doubts about the condition of my hands and my recovery from injury,” he says.

“My injured hand has perfectly recovered thanks to the efforts of Professor Loris Pegoli, who has worked a miracle. He gave me my favorite [punch] back and I have returned to the ring as strong as I ever was, with all of my weapons.”

Petrosyan is excited to be competing under the GLORY banner once again and says it will feel “like coming back home.”

“The GLORY Lightweight Grand Prix winner’s trophy I won in Rome in 2012 [at GLORY 3] is one of my favorite,” he says.

“I felt one of the greatest emotional moments of my life when the referee raised my hand in Rome. Now I am back again into the scene in Italy, in front of my public, and in November I am back in the leading kickboxing league.”

Petrosyan won the 2012 GLORY Lightweight Grand Prix by beating three opponents in one night at GLORY 3 ROME. In the final he met Van Roosmalen and out-pointed him. Now he has the current lightweight champion in his sights again.

“At the start of this year I commenced a world tour challenging all the existing world champions,” he laughs.

“I beat Kehl and Xu Yan, I have a very strong desire to unify all the world belts and collect them all. Of course I cannot miss out on one of the most prestigious, which is the GLORY world title.”

Petrosyan’s return has sparked immense interest among GLORY’s lightweight roster and several fighters have petitioned to face him in Milan. News of his opponent will be announced in the near future.