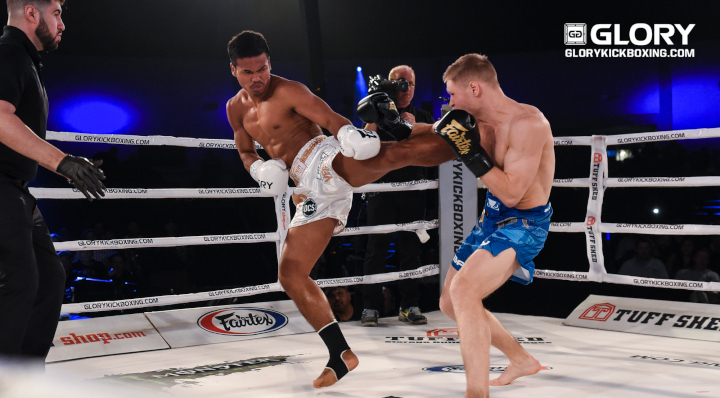 The pair met previously in the finals of the GLORY 39 contender tournament with Thailand’s Petchpanomrung edging the Ukrainian Adamchuk by split decision. The rematch emanated from the Arena Theatre in Houston and marked the promotion’s main-card debut on UFC Fight Pass.

The two southpaws opened with kicks. Petchpanomrung threw his patented left kick and followed it with a right hook.

The pair began to clinch with the Thai fighter landing short knees. Adamchuk looked to use angles, but struggled to get inside boxing range. Petchpanomrung threw an axe kick that wowed the crowd and drew a smirk from the challenger. The round closed with a series of body kicks from Petchpanomrung.

Adamchuk opened round two by landing a side kick to the head of Petchpanomrung. The pair exchanged low kicks before re-entering the clinch.

The champion went to work with his left kick once more, ripping Adamchuk to the leg and body. A switch kick from Petchpanomrung found the forearm of Adamchuk. The Ukrainian sought boxing range, but Petchpanomrung maintained his distance.

Petchpanomrung threw a wheel kick and followed it with a punch, but Adamchuk was wise to both attacks.

A body kick from the 23-year-old found the ribcage of Adamchuk. The clinch work continued as both fighters fired short knees. Adamchuk egged on the champion and received a front kick to his face for his antics.

Adamchuk flicked his jab to open the championship rounds. Another clinch saw Adamchuk throw a punch after the break command and the referee warned him for it.

Petchpanomrung connected with a heavy body kick before clinching and landing more knees. Adamchuk was visibly frustrated with the flow of the fight. A low kick from Petchpanomrung was followed with a right hook. He finished the round with another body kick.

The final round saw Adamchuk land a right straight early. Petchpanomrung answered with a head kick to keep the challenger guessing.

Adamchuk fired a spinning backfist and then a rolling thunder, but neither strike found its mark. Petchpanomrung landed a short knee in the clinch and he played to the crowd. Adamchuk made it to the final bell, but failed to solve the puzzle of the champion.

The decision from the judges was unanimous for Petchpanomrung who successfully defended his title.

“I’m very happy with my performance. Thank you to everyone in Thailand and Texas,” said the champion.