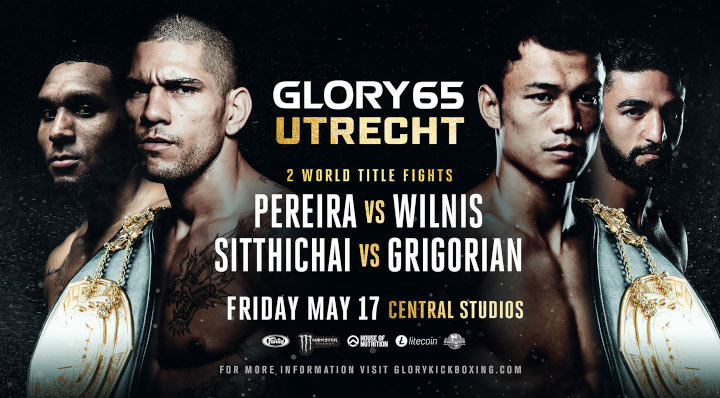 Wilnis, who beat Simon Marcus and Israel Adesanya during his own GLORY championship tenure, holds two career victories over Pereira: a TKO in 2012 and a 2015 unanimous decision win at GLORY 20 DUBAI.

Since then Pereira has gone 5-1 in GLORY. The heavy-handed Brazilian captured the title from Simon Marcus at GLORY 46 and is now riding a four-fight win streak, with all four of those wins being title fights.

Looking to establish himself as unquestionably the division’s dominant force, Pereira has long wanted to avenge his early career losses to Wilnis, while Wilnis has been relentlessly focused on regaining the middleweight championship ever since the day he lost it.

Vengeance is also on the mind of lightweight contender Marat ‘The Armenian Devil’ Grigorian (60-11-1, 35 KO’s) as he heads into his third title challenge against defending champion Sitthichai ‘The Killer Kid’ Sitsongpeenong (122-30-5, 32) in the co-headline bout.

Their first title fight took place at GLORY 36 COLLISION when Sitthichai, fighting out Bangkok, Thailand, retained his title by way of a split-decision win after five rounds. They rematched at GLORY 57 SHENZEN in August last year and Sitthichai again came away with the split-decision win.

Grigorian’s team cried foul at the Shenzen decision, pointing out that the FightMetric stats showed their man outlanding the champion by some margin.

Their calls for a rematch began immediately and since then Grigorian, fighting out of Armenia by way of Belgium, has stayed in the #1 contender slot by beating former title challenger Chris Baya. The rivals now look for a definitive result in this trilogy title bout.

Broadcast details and additional bouts for GLORY 65 UTRECHT, GLORY 65 SuperFight Series and the GLORY 65 Prelims will be announced shortly.


The exclusive pre-sale for GLORY 65 UTRECHT begins this Friday, April 5 at 9am CEST.

Fans registered at GloryKickboxing.com will have the exclusive ability to purchase tickets before they go on general sale on Monday, April 8. Visit tickets.glorykickboxing.com to buy tickets.

Password and instructions on how to access the pre-sale will be sent out to registered fans by email at 9am CEST, Friday, April 5.


GLORY 65 UTRECHT is presented in association with Monster Energy, Fairtex, Litecoin and House of Nutrition.

GLORY 81 available for livestream all over the world