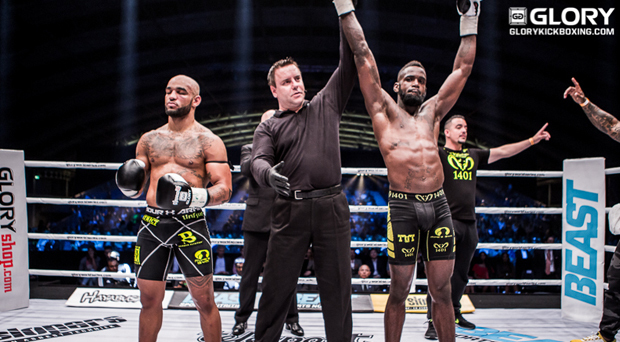 Groenhart won the Welterweight Contender Tournament at GLORY 31 AMSTERDAM this past Saturday night, taking back-to-back wins over Karim Benmansour of France then Yoann Kongolo of Switzerland in the final.

The victory books him a new title shot against world champion Holzken. It will be their third time meeting in the ring and their second contest under the GLORY banner. The first took place at GLORY 26 AMSTERDAM in December and the result divided opinion, with Groenhart and his supporters strongly believing the judges' decision should have gone his way.

“Oh it's going to be a different fight [this time,],” Groenhart said backstage immediately following his tournament win.

Groenhart also had a message for Holzken on fight night. In the ring he took the announcer's microphone and climbed a ring-post to cry out to Holzken, “Where you at Nieky? I'm back baby!”

Afterwards he explained what he meant. “A couple of months ago when I lost to [Cedric Doumbé] in Paris, Nieky was there and he told me [on camera], “Get to the back of the line Murthel!” So now I told him, 'Hey Nieky, I'm back baby!”

Their Amsterdam fight was preceded by huge build-up, mainly because Holzken at the time had his own reality show on national Dutch television. But there was also considerable back-and-forth between them because Groenhart has never accepted the judges' decision in their very first fight, back in 2010, and has sought revenge ever since.

He also sought to rattle Holzken and unsettle him mentally by way of a constant stream of trash-talk. Holzken admitted after the fight in Amsterdam that Groenhart had indeed gotten inside his head with his stream of invective, and that it had taken some focus away for him during the fight.

GLORY's next event takes place Friday, July 22 in Norfolk, Virginia, USA. The show is headlined by Canada's Gabriel Varga seeking to regain his title from Serhiy Adamchuk, the man who took it from him in November last year.