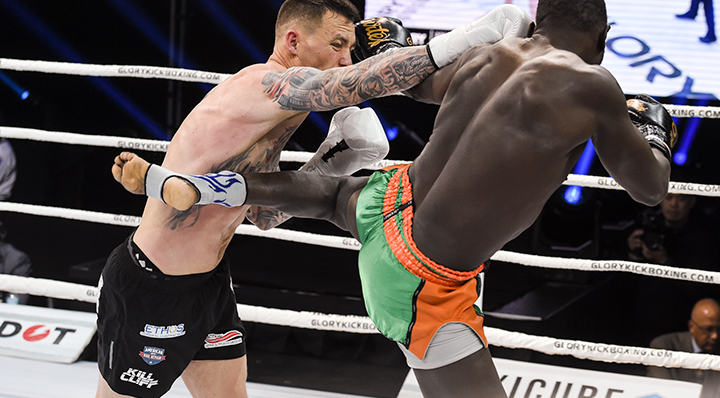 GLORY’s return to the Windy City for back-to-back events opened with a welterweight match-up between Justin Moss (5-3, 2 KO’s) and Kuchlong Kuchlong (8-1, 7 KO’s).

Moss started aggressively, marching forward and pushing Kuchlong against the ropes. Kuchlong tried to stay at range and kick, but Moss was able to counter and stay in his face.

A body kick from Kuchlong reddened the body of Moss, but it did not slow his advance. A right uppercut from Moss found its mark, but he was caught once more by the left kick from Kuchlong. Moss continued his forward pressure until the round expired.

The pair traded kicks early in round two. Moss plowed forward and fired punches. Kuchlong was relentless with his body kicks, as the right side of Moss’s body turned more colors than his tattooed left side.

The pressure of Moss began to work against him as Kuchlong was able to counter with punches. Moss tried to make it ugly late in the round, taking the fight to the ropes and throwing short shots from the clinch.

A heavy right hand from Moss greeted Kuchlong to start the final frame. Moss remained the aggressor, forcing Kuchlong to clinch. Moss did not give Kuchlong any space to work, closing the distance and delivering repeated right uppercuts.

The pace slowed in the fight’s waning moments, but Moss stuck to his overhand right and uppercut. Kuchlong tried to clinch and land knees, but the fight was sent to the scorecards.

The judges were split, but two rewarded the Colorado-based Moss for his efforts.

“It was a little uglier than I would have liked, but it’s tough on nine days’ notice,” said Moss. “I’m happy to get the win and I’ll go back to drawing board and iron things out.”