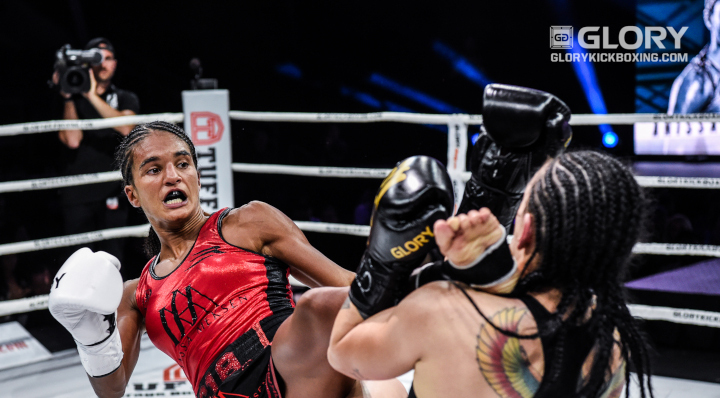 Meksen: “I’ll knock Menezes out in New York to make sure I don’t get robbed again"

“I won all five rounds in Denver and got robbed. So the best way to not get robbed is to knock your opponent out.”
That’s the response from former super-bantamweight champion Anissa Meksen when asked about her approach to next week’s GLORY 61 NEW YORK rematch with Jady Menezes.
Menezes challenged Meksen for the belt at GLORY 56 DENVER in August and came away the winner - and new champion - by way of a decision which has gone down as possibly the most controversial in GLORY history.
While the decision of the Colorado State Athletic Commission-appointed judges was final, GLORY moved to make an immediate rematch to settle the issue. That fight takes place next Friday in New York.
“It's time to restore the truth! I hope that Menezes has enjoyed the belt for three months because she will not see it again!” says Meksen.
“But I do not live in the past. My destiny was to fly to Denver; what happened, happened, and now I'm looking right in front of me.
“My only goal is to take back what was stolen from me. I'm the best in the world.”
Meksen says she has made “very, very hard” preparations for this fight, working not only with her usual crew, Team OGB, but also with teams in Paris and Barcelona, to get new sparring partners.
“Next week, I will resume my title reign and set the score straight,” she says.
“Once I have the belt back, I want girls to come to Europe to challenge me.
“For me to fight in the USA is extra constraint - travel, jet lag, costs of early arrival in the time zone - so I want my next defenses to be in France or Europe.
“But first, justice. I must take back what was stolen, then we can look at defenses.”
Anissa Meksen rematches Jady Menezes at GLORY 61 NEW YORK next Friday, November 2 at the Hammerstein Ballroom in central Manhattan, New York City.