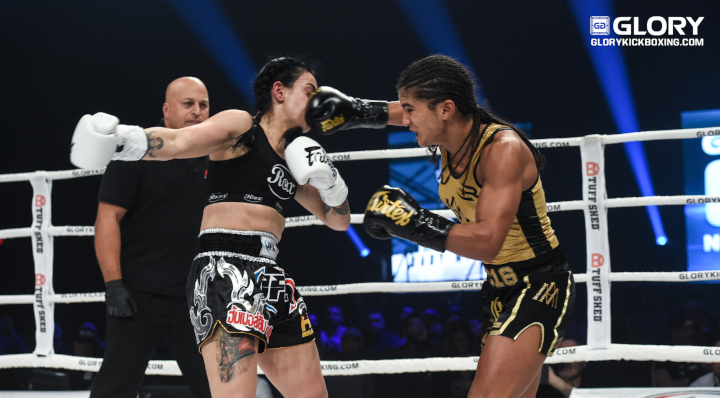 GLORY Kickboxing’s return to New York for its 61st event featured a super bantamweight rubber match between champion Jady Menezes (13-3, 5 KO’s) and the woman she defeated to claim the belt, Anissa Meksen (97-4, 31 KO’s).

The pair’s first meeting came at GLORY 43, with France’s Meksen cruising past the Brazilian Menezes by decision. A rematch came at GLORY 56 in Denver with Meksen’s title on the line.

After five rounds, it appeared that Meksen had retained her belt, but the judges saw something else, awarding Menezes the championship via controversial split decision. The questionable outcome set up the pair’s trilogy in the Big Apple.

Meksen cracked Menezes with a left hand from range. Menezes tried to get inside, but was met with a jab-straight combination from the former titleholder. Meksen again snapped the head of Menezes with her jab.

A heavy body kick from Meksen found the stomach of Menezes. In the clinch, Meksen delivered short knees. A straight right hand from Meksen slowed the advance of Menezes. A push kick sent the Brazilian to the canvas for a brief moment. A wild exchange closed with a left hook from Meksen as the round expired.

A huge left hook from Meksen rocked Menezes at the start of round two. Meksen flurried hard with punch after punch. Menezes tried to circle away, but Meksen was relentless. She attacked the body, opening up the head of Menezes for more punches. The onslaught was too much for the referee, who dove in and saved Menezes from further punishment.

“I lost the fight in Denver, but this time I came in confident. I fought as hard as I could and I finished it. I hope Jady recovers, but I’m here to stay,” said the two-time champion Meksen. “I saw that once I got her with that punch, I went all in.

“All I have to say is that anyone who wants to come after me, I’m going to kill them!”