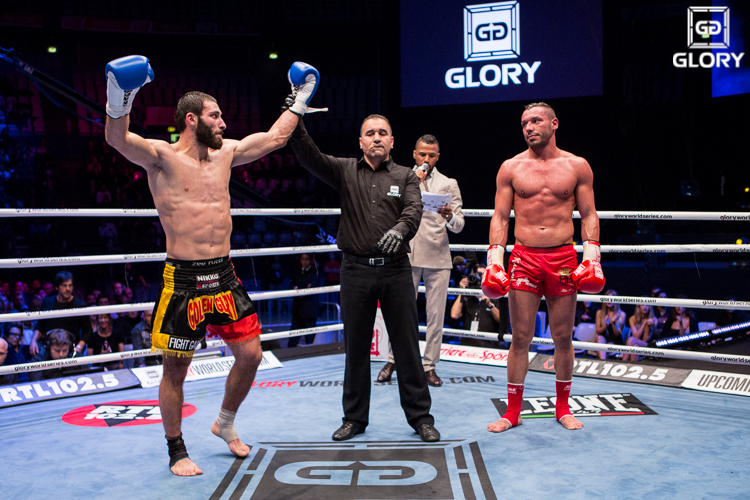 He made it all the way to the semi-final stage of the lightweight tournament at GLORY 3 in October, beating Shemsi Beqiri in the quarter-finals before being eliminated via a decision loss to Giorgio Petrosyan, world ranked number one, who went on to win the competition.

Prior to the tournament Kiria was a virtual unknown to the world’s kickboxing fans; none but the truly hardcore knew who he was. After the tournament, he was on his way to becoming a fan favorite and is now ranked number three in the world.

People were very impressed with his performance and particularly his high level of aggression and willingness to get into heavy firefights.

This weekend he faces Yuri Bessmertny (32-10-1, 16 KO’s) a tricky kickboxer from Belarus who is hovering just on the edge of the top twenty. The fight takes place on the main card of GLORY 7 MILAN at the Assago Forum in the iconic northern Italian city.

Petrosyan is also on the same card, but Kiria isn’t obsessing over last year’s defeat. Revenge will come when it comes.

“It was the best year for me [so far], it was OK. I need more experience and now I am getting more experience this year. This year and next year I will be more successful,” he says of his standout 2012 run in the GLORY ring.

Also unchanged is his desire to represent his Ashihara Karate style in the ring. Kiria is unusual on the kickboxing circuit as his base is neither pure kickboxing nor Muay Thai. Instead he comes from a hard style of karate which has its roots in Kyokoshin.

Ashihara Karate is also the style of world number one heavyweight Semmy Schilt, the GLORY Heavyweight Champion. He and Kiria train in the same dojo and they are both black belts in the style. Like Schilt has done, Kiria wants to conquer the fighting world with Ashihara.

“I started with karate when I was nine years old, I really like it. It is really good beliefs, good heart. I respect karate,” he explains.

Kiria has made considerable personal sacrifices to pursue his dreams and his beloved karate style, leaving his homeland for months at a time in order to train and study with Schilt and sensei Dave Jonkers in their northern Netherlands base.

“Every year I spend six months in my country and six months in Holland. But its not difficult for me, I already did it for six years. Half and half. Its OK, I like both countries and I like the people. I have friends everywhere, so I am never sad,” Kiria smiles.

As for this weekend’s fight? He smiles again.

“[Bessmerty] is from Belarus, a kickboxer. I know him from some fights I saw, I had time to study his fights so I have some secret plans against him - I am going to win.”