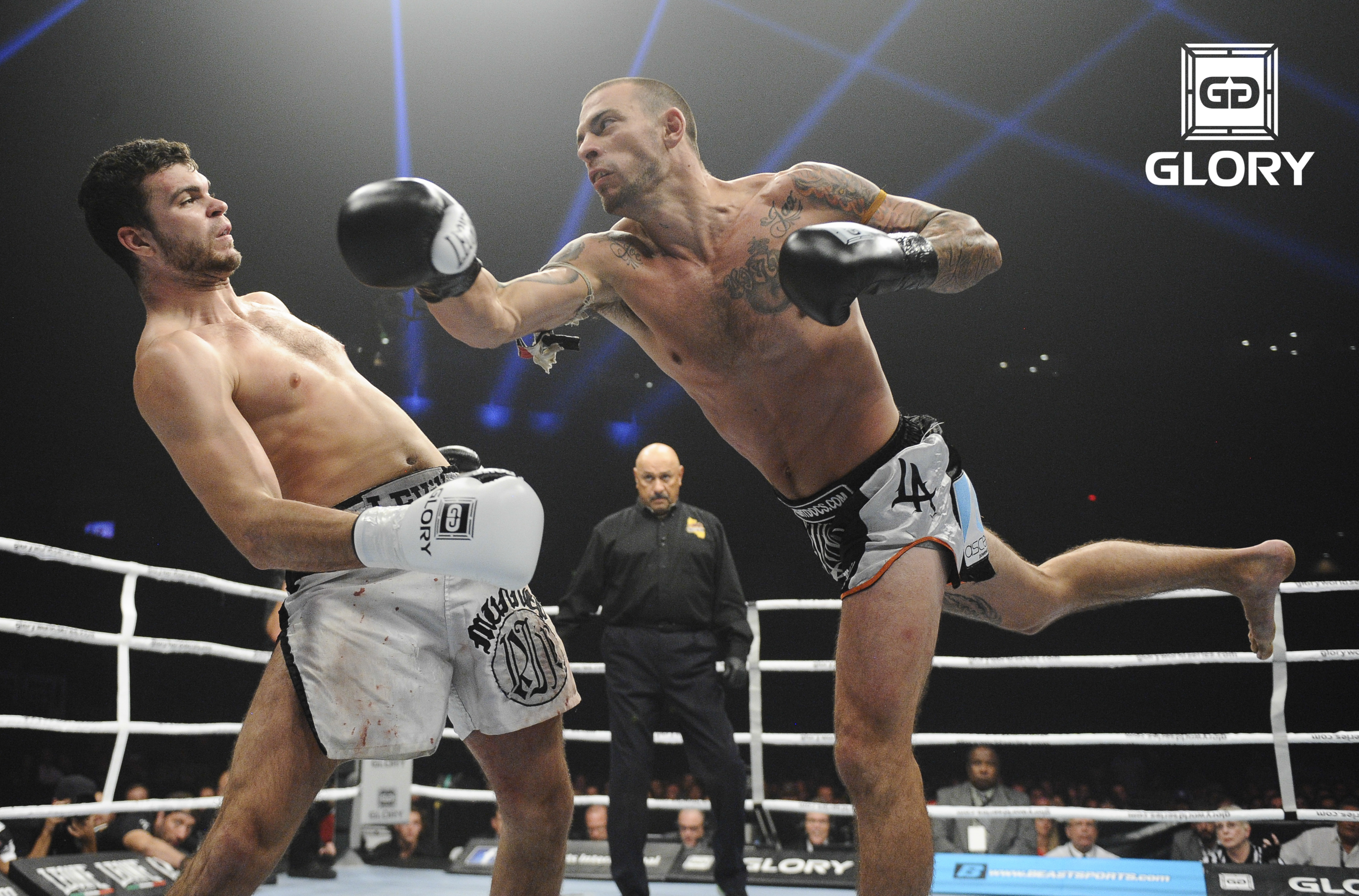 INSIDE GYM - THE YARD

Joe Schilling's first steps into professional Muay Thai were taken in the shadow of the Hollywood hills in Los Angeles, California. The location could not have been more fitting, for Schilling's life story is one that could have been penned by those myriad screenwriters who populate Los Angeles' cafes and bars.

A young man with no father in his life finds himself burning with teenage angst and is drawn to the martial arts. Along the way he encounters an older gentleman of Japanese heritage and the two embark on a journey that is as much about filling the gaps in each other’s’ lives as it is about training and competing.

The only substantial difference between Joe Schilling and The Karate Kid is that the art of Muay Thai is the one which gave Schilling’s life a sense of direction and purpose. Having left his native Ohio in his late teens, his crossing paths with Mark Komuro at the Los Angeles Boxing Club would prove to be one of the most pivotal events of his life.

“I met him when I first moved to LA and I was an amateur. I was with him from the amateurs to the pros and he’s been there for every fight I’ve had since,” recalls Schilling, who on September 28 will take part in the GLORY 10 middleweight tournament at the Citizen Bank Arena in Los Angeles.

“I didn’t have a great relationship with my father, so Mark’s kind of been my dad for the last 12 years now. One of my sons is named after him, we’re pretty close. It’s great to have somebody in your corner that has had such an effect on your life.”

“Mark is 63 and he still holds pads. He still works out for an hour a day as well as training me. And he weighs about 145lbs! He’s a little Japanese guy but man he has got some f--king huge triceps, I’m telling you. He is a tough old bird for sure,” he adds, the affection evident in his tone.

Schilling is at The Yard, a gym he co-owns with Komuro in downtown Los Angeles. He remembers seeing Schilling as an intense, solitary young man who would train alone on a heavy bag for hours.

“I was a trainer at the LA Boxing Club around 1988. Shortly after that I was training in Muay Thai. Then Joe showed up at the gym I guess around 2002, he used to kind of train on his own. One day he asked me to corner him for a fight and I said yes. I’ve been stuck with him ever since,” he smiles.

“When I met him he wasn’t very close to his dad. He was kind of wild. So I tried to give him a little guidance about life in general. But mostly it’s been about Muay Thai. Fighting is pretty much my whole life anyway.”

Komuro grew up in what was then known as East Los Angeles, an historic area of the city which houses Chinatown and Little Italy among its districts. These days some of its more venerable parts have become gentrified, as with inner cities all over the globe, but in Komuro’s youth there were some hard streets around there.

Multiculturalism wasn’t then what it is now and as the son of Japanese parents, Komuro would often find himself on the receiving end of unwanted attentions. This perhaps explains why, when he did start looking into martial arts, he had no time at all for anything which didn’t have immediately obvious practical applications.

“Mark is Japanese-American, he had it kind of rough when he was growing up in East Los Angeles. He was on some mean streets. He got into martial arts when he was young, for self-defence and stuff,” Schilling relates.

“He started with Kung Fu but after a while he realized it wasn’t that effective. So he started Aikido and he only lasted a couple of months at that. The instructor was like, ‘You have to attack me like this, then I do this’. Mark was like, ‘Well what if I just punch you in the face though?’ and the instructor was like ‘No, you can’t do that’. Mark thought it was ridiculous.

“So then he went off and joined the LA Boxing Club, kind of an historic boxing gym in downtown LA. Guys like Oscar De La Hoya and Shane Moseley have trained there, it’s really legit. So he got really got into boxing and studied it a long time and then he picked up on Muay Thai. Altogether he’s been in martial arts about thirty years now.”

Komuro shrugs. “I boxed, did Aikido, Kung Fu, Karate. A little bit of everything. Muay Thai was more like boxing, where you hit people and get hit back, which I preferred to just hitting standing targets. But the whole MMA thing never interested me. I didn’t really want to roll around with another guy for five hours a day.”

The boxing gym where Schilling and Komuro spent their early years was housed in a unique location.

“It was in this state-run, low-income facility which actually used to be the Los Angeles County Jail. On the fourth floor was this boxing gym. During my amateur years people would be asking me where I train and I’d be like, “Well, I train in the old jail”. We used to get some funny looks I can tell you,” Schilling laughs.

Not long after landing in Los Angeles, Schilling had gotten himself a girlfriend. When she became pregnant with their first child, he turned his attention to making money. The only way he could see to do it was to open a gym of his own and supplement his fight purses with the training fees he could earn.

He says it took him six months to persuade Komuro - “He kept saying no, but he cracked eventually” - before the two found themselves a small premises in downtown LA. It wasn’t big but it suited their purposes - the only thing they needed was a name.

“We really liked the old place and so when we got ourselves the new gym we tried to bring that feel with us - no frills, just a hardcore training place. We were trying to think of a name for the new gym, going through all this cheesy stuff, warrior-this and that,” says Schilling.

“We were kicking around one day and I said ‘Hey, what do you call the workout area in a jail?’ and someone said, “It’s called ‘The Yard,’” and that was it, the name stuck. And when I walk out to fights I walk out in an orange jumpsuit like they give you in jail. It’s just a little fun.”

The Yard quickly became an institution in its own right. From a premise of 1,000 square feet populated by “about 15 students”, the team has now grown to a 7,000 square foot facility with over 150 members. It also has a unique format - there are neither classes nor timetables. Instead the gym is open all day and people are put through routines as and when they arrive.

“I personally didn’t learn very well in the class environment. I think everyone has their own needs and I think with 30 people in one class trying to learn the same thing it’s hard to get what you need in particular,” says Schilling.

“We do it in shifts, Mark does from 6am to 12pm and I do the later shift. You can come in any time during those hours and we are training people. We teach the individual as an individual and it works out really well for the students, they progress fast. We’ve built amateur fighters in six months. When we started only had 15 or 20 students, it was easier. Nowadays we have more than 150 so it’s a bit harder.”

Schilling admits that there could be easier ways to run a gym, and more lucrative ones. “It pays my bills and keeps me in the gym and able to train all day, fight and compete, plus I get to wear shorts and flip-flops all day. It’s not making us rich by any means but we’re certainly getting by.”

“Money’s really important though. I am 29 years old and I have two kids. Life revolves around money, kids have to eat. I’m not looking to get rich off of teaching Muay Thai though. I plan to make my money through fighting and my brand, Can’t Stop Crazy.”

‘Can’t Stop Crazy’ is simultaneously a brand and a collective, somewhat akin to when musicians come together to form a super-group. Schilling, Kevin Ross, Ky Hollenbeck and several others came together to form a brand which could produce t-shirt sales and mutually beneficial training sessions at the same time.

“We’re considered the top guys in the Muay Thai industry in the US as far as things like photography, video and clothing goes. It’s really helped build a fanbase for each one of us. We get the most money when we fight because we sell the most tickets, we have the most fans,” says Schilling.

“Why wait for the little blog sites to write about us? We do it ourselves. I’m sure it’s played a part in how I got on the radar with GLORY. The brand is going well, it’s growing our fanbase and it’s helping the sport grow in the US.”

With a place in the GLORY 10 middleweight tournament, Schilling is just weeks away from the biggest fights of his career to date. Add that to a successful gym, growing brand and healthy young family, it’s not hard to see why he is a lot happier than the young man who first crossed paths with the older Japanese gentleman more than a decade ago.

Komuro gives Schilling a shrewd look; there is a clear sense of paternal pride in the assessment he offers of his long time student and friend.

“As a fighter he is becoming much more balanced. He used to fight on sheer heart, these days he used his brain a lot more. He has a lot more strategy now,” he says. “And as a person he’s definitely starting to mature. He is becoming more responsible. He’s grown up quite a bit.”