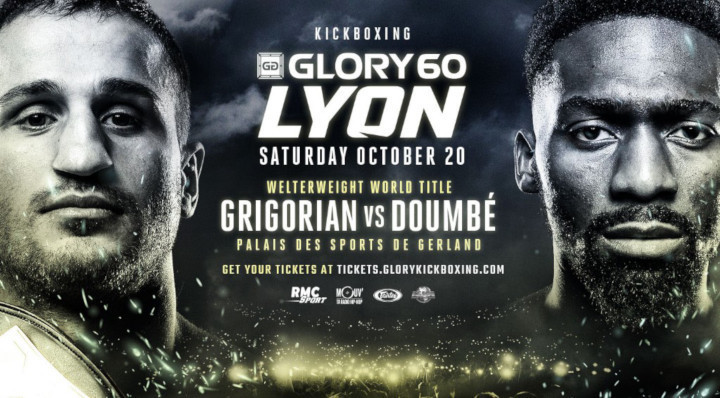 AMSTERDAM – GLORY welterweight champion Harut Grigorian (48-11, 34 KO, fighting out of the Netherlands) will be entering enemy territory when he travels to France to take on No. 1 contender Cédric "The Best" Doumbé (70-6-1, 41 KO, fighting out of France) at GLORY 60 Lyon.

The champion's most recent defeat came on French soil, losing to Murthel Groenhart at GLORY 42 Paris last year. In the time since, Grigorian has put together a four-fight winning streak including contender tournament victories over Karim Benmansour and Antoine Pinto, revenge against Groenhart to claim GLORY gold, and a victory over top contender Alim Nabiyev in his first title defense.

Doumbé, a former welterweight champion himself, earned this opportunity to reclaim the belt by knocking out back-to-back opponents. It took just 33 seconds for him to blitz Thongchai Sitsongpeenong at GLORY 53 SuperFight Series in May and he followed that performance with a second-round stoppage of Alan Scheinson at GLORY 55 SuperFight Series in July.

Stéphane "Ippo" Susperregui (47-5-2, 27 KO, fighting out of France) will once again enter the GLORY ring, accepting his first fight for the promotion since GLORY 5 London in 2013. His opponent at GLORY 60 SuperFight Series is 21-year-old Dutch-Surinamese prodigy Donegi Abena (9-1, fighting out of the Netherlands). Their bout will be contested at light heavyweight.

Hailing from Central France, Michael Palandre (25-2, 9 KO, fighting out of France) has also been added to the card, competing at lightweight.

Now ranked No. 4 in the division, Ezbiri returns to the same arena that birthed his GLORY 47 Lyon contender tournament victory, which included wins over Anvar Boynazarov and Azize Hlali. Pinto was born in France, but now lives and trains in Thailand. He will be looking to improve his No. 8 ranking and put together the first winning streak of his young GLORY career.

The five-fight card for GLORY 60 Lyon can be found below:

Hameur-Lain has reeled off three wins in-a-row and five of his last seven, with each victory coming by way of knockout. Micheletti is a veteran of the Brazilian striking scene, having faced current and former GLORY champions from the region including middleweight champion Alex Pereira, former light heavyweight champion Saulo Cavalari, and upcoming heavyweight title challenger Guto Inocente.

Senegalese slugger Mamadou Lamine "Black Rock" Sene (12-2, 12 KO, fighting out of France) and Brazilian bruiser Bruno "Muhammad" Chaves (18-1, fighting out of Brazil) will both be making their GLORY debuts at GLORY 60 SuperFight Series, squaring off at heavyweight.

At just 23 years old, Muay Thai practitioner Jimmy Vienot (61-15, 33 KO, fighting out of France) already has already competed at the sport's highest level, including two prior appearances for GLORY. At GLORY 60 SuperFight Series, he goes up against another gifted young welterweight in 21-year-old Dmitry Menshikov (fighting out of Russia).

The current fight card for GLORY 60 SuperFight Series can be found below:

Two additional bouts are expected to be added to GLORY 60 SuperFight Series in the coming weeks.

The GLORY 60 prelims, which lead off fight night, will showcase up-and-coming talent from the French region.

The four-fight GLORY 60 preliminary card can be found below:

Streaming details for the GLORY 60 prelims will be confirmed and announced shortly.

Tickets for GLORY 60 Lyon – including access to GLORY 60 SuperFight Series and the GLORY 60 prelims – are on sale now and available for online purchase by visiting tickets.glorykickboxing.com or francebillet.com (for fans in France).