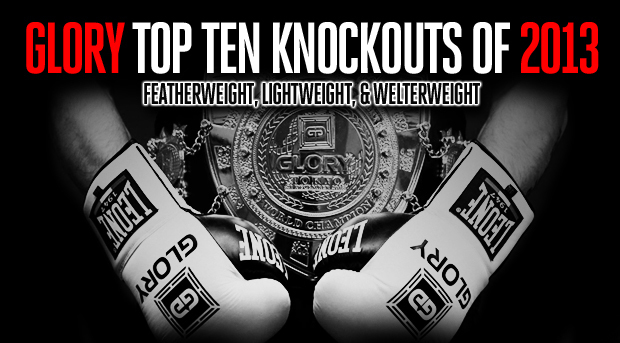 One of the most exciting things about GLORY World Series fights is the fact that one punch or kick can end them at any second. And it happened a lot last year - some of the biggest knockouts in kickboxing history took place in 2013.
In fact we had so many that rather than do a simple ‘Best of…’ for the year, we’ve had to divide ‘Best Knockouts’ into two sections. This first section looks at the knockouts which happened in the three lighter divisions - featherweight, lightweight and welterweight.

Before they met in the semi-finals of the Lightweight Championship Tournament at GLORY 12 NEW YORK, pretty much the only person who expected Andy Ristie to knock Giorgio Petrosyan out was Andy Ristie himself.
Almost nobody gave him a chance of victory, even by decision, but Ristie had confidently asserted in pre-fight interviews that he could take the Italian-Armenian maestro out and he followed through in spectacular fashion to score perhaps the biggest upset knockout in all of kickboxing history.

Ristie made history by stopping Giorgio Petrosyan in their semi-final fight, but that was only half of the surprises he would deliver that evening. ‘The Machine’ applied the same pressure to Robin Van Roosmalen in the final of the Lightweight Championship Tournament.
Bookmakers odds went out the window as Ristie’s unorthodox style and killer left uppercut went to work. His win earned him $150,000 and meant that nobody could accuse him of winning his tournament fights by fluke. Andy Ristie is the real deal.

Los Angeles man Daniels is a living legend in the karate world. A winner of every tournament worth mentioning, he brings a unique repertoire of kicks to the world of professional kickboxing. Every opponent thinks they have him figured out - “trap him in the corner and let your hands go” - but his 24-0 record going into this fight proved them all wrong.
Foster, a UFC veteran with wins over the likes of Matt ’The Immortal’ Brown, was one of those who thought he had a solid gameplan for Daniels. Instead Daniels read his movements then took him out with a trademark spin kick to the head, scoring one of the year’s most spectacular finishes.

The 21-year-old British lightweight Reece McAllister quickly made a name for himself in the Muay Thai scene before crossing over into kickboxing.
At GLORY 11 CHICAGO he faced Australian knockout artist Steve Moxon and at first his superior reach had him winning the fight and frustrating his opponent.
But when the stocky, shorter Moxon finally figured out a route inside, he landed one of his famous bombs and ended the fight there and then with one of the year’s most spectacular knockouts.

Johann Fauveau has a reputation as a tough customer but the Japanese standout Hinata proved more than a match. This was a big test for Hinata. He had proved successful in his native Japan but had endured mixed results against European opposition.
He used his GLORY to show that he deserves a place in the organization, savagely dismantling Fauveau with leg kicks until the Frenchman could hardly stand. Fauveau gamely tried to stay in the fight but his corner knew he was finished and threw in the towel at 0:48 of the third round.

The Dutch-Moroccan featherweight Mosab Amrani came into this fight off a long layoff due to knee surgery and was widely expected to lose to the active and highly accomplished Liam ‘Hitman’ Harrison.
Harrison is one of Europe’s premier Muay Thai fighters at this weight and is notoriously difficult to score clean hits on. That made it Amrani’s finish all the more spectacular. He weathered an early storm to pick his moment, land a killer body shot and end the fight in the first round.

While he has plenty of experience under his belt, De Bonte is a newcomer to the world stage and was the underdog going into this fight. Aside from Nieky Holzken, critics have always felt L’houcine Ouzgni to be the man to beat in the welterweight division.
De Bonte had other ideas. The Belgian fighter is well known for having killer knee strikes and he used one of his trademark blows to full effect in the very first round of the fight, taking Ouzgni out in very impressive fashion.

Toronto, Canada welterweight ‘Bazooka’ Joe Valtellini has been one of the year’s biggest success stories. Having arrived at GLORY 6 ISTANBUL as an unknown, he has gone 4-1 in the organization and was runner-up in the GLORY 13 TOKYO Welterweight Championship Tournament.
Valtellini earned his spot in the tournament by beating French standout Karim Ghajji, a veteran of over 100 fights. Their clash is also a Fight of the Year contender. It went at a high pace and both men had to dig deep before Valtellini was able to take control and stop Ghajji not long before the end of the third round.

Having earned a spot in the GLORY 13 TOKYO Welterweight Championship Tournament, Canadian-Italian kickboxer Valtellini intended to stamp his authority on the competition. First up was previously undefeated karate master Raymond Daniels.
Daniels had caused endless problems for his past opponents. He was unbeaten going into this fight and had stopped UFC veteran Brian Foster at GLORY 11 CHICAGO with one of his trademark spin kicks. Valtellini became the first opponent to figure his unique timing out, destroying his stance with leg-kicks then going high for a head-kick.

This is one of three mentions Andy Ristie has in the ‘Knockout of the Year’ nominations, which just goes to show what an incredible run he had in 2013. Ristie was the underdog against the established veteran Kraus but quickly flipped the script.
Using his reach advantage, Ristie stayed away from Kraus’ dangerous hands and hammered him with push-kicks and low-kicks. After shutting down Kraus’ offense he came in to use his deadly knees, landing some to the body and then bringing one high to end the fight with a clean KO in round two.