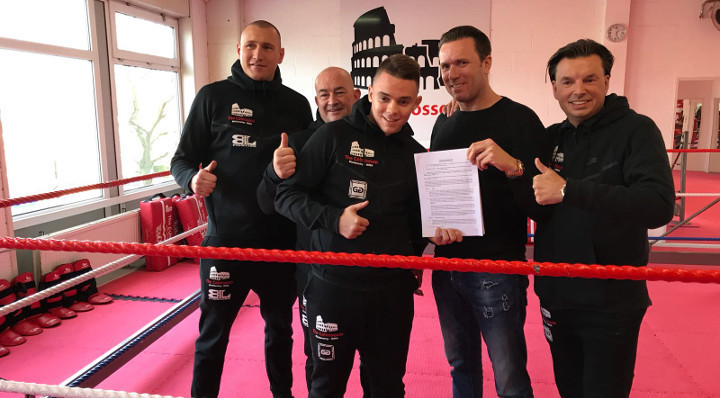 GLORY Kickboxing today confirmed the signing of Mohamed ‘The Destroyer’ Jaraya (69-6, 36 KO’s) to an exclusive multi-fight, multi-year deal. The 21-year-old prospect will join the welterweight division.

“I feel great. GLORY is the top organization in kickboxing and it’s where all the best fighters are. If you want to be the best you have to beat the best, and that is why I am here,” he said today after signing the deal.

“Welterweight is a new division for me and it makes me even more motivated. I have one mission and that is to destroy everyone in front of me. I will show them why I have my nickname.

“I am going to be even more powerful at this weight than I was already and I think the guys in this division have a big problem now that I am here.”

Jaraya sees himself entering the contender picture quickly, but doesn’t have his sights set on any particular fighter for his debut.

“Everyone is welcome! I don’t care who I fight first. You can put anyone in front of me. They are all going to get it one by one anyway so it doesn’t really matter what order they come in,” he said.

“We have the best kickboxers in the world here in the Netherlands and since the age of 17 I have been fighting with guys at the highest level. I am used to it. It’s my time now. This is the biggest platform in the world.”

Jaraya is from Den Bosch, also the home city of featherweight champion Robin van Roosmalen, but trains and fights out of Team Colloseum in the nearby city of Utrecht. His teammates there include former GLORY middleweight champion Jason Wilnis and lightweight contender Tyjani Beztati.

Until now he has competed as a lightweight and has steadily gathered a following thanks to an all-action fighting style which has earned him repeated ‘Fight of the Night’ nominations. His record includes wins over GLORY veteran Nordin Ben Moh.

News of Jaraya’s GLORY debut will be announced soon via GloryKickboxing.com