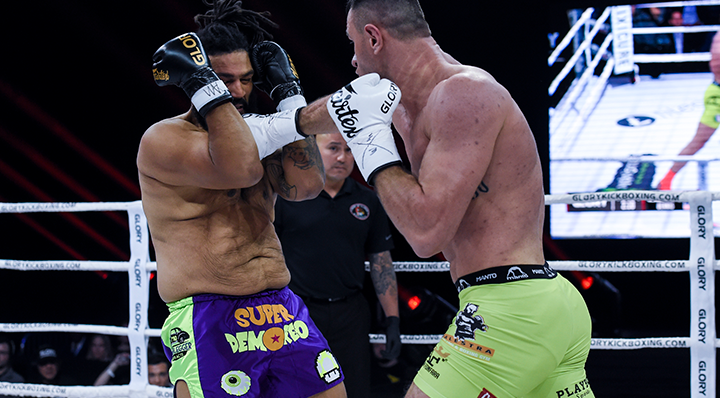 The Windy City was host to the GLORY 71 SuperFight Series on Friday, Nov. 22. The action was headlined by a heavyweight match-up between Poland’s Arkadiusz Wrzosek (12-5, 7 KO’s) and American Demoreo Dennis (12-9, 10 KO’s).

Wrzosek attacked with a front kick and followed with a low kick. Dennis landed a right hand as he got into boxing range. Wrzosek changed levels with his punches, peppering the head and midsection of Dennis.

A step-in knee from Wrzosek slowed the advance of Dennis for a moment. Dennis maintained a high guard, but absorbed a lot of kicks because of it. Wrzosek flurried with combinations to back Dennis against the ropes. A flying knee from Wrzosek just missed its mark late in the round.

Dennis came forward to open the second frame which allowed Wrzosek to time a heavy counter knee. The towering Polish fighter continued his assault with combinations. He continued to target the body of Dennis with punches, knees and front kicks. The low kicks of Wrzosek took their toll as Dennis struggled to put weight on his lead leg.

An uppercut in the corner hurt Dennis and a chopping low kick from Wrzosek put him on the canvas. Blood poured from the nose of Dennis and another low kick sent Dennis to the ground again. Despite being in obvious pain, Dennis tried to keep fighting. A final low kick put Dennis down for a third and final time to end the fight.

“I tried to keep it simple. I think I’m a more technical fighter than the others in this division,” said Wrzosek. “I think my low kicks are really strong. They are my best technique. I have six knockouts by low kicks.”

Chasteen proves too much for Imazaki

The SuperFight Series of GLORY 71 in Chicago featured a welterweight fight between Nick Chasteen (12-6, 4 KO’s) and newcomer Seijo Imazaki (0-1).

The karate stylist Imazaki came out kicking. He followed with an overhand right, but Chasteen was able to evade. A left hook from Imazaki found the jaw of the GLORY veteran, who closed the distance and landed with punches. After separating from the clinch, a cut was opened over the left eye of Chasteen due to a clash of heads. An uppercut from Chasteen was answered with a rolling thunder attempt from Imazaki. A head kick from Chasteen landed as the round expired.

The doctor was called in to inspect the cut on Chasteen, but he allowed the fight to continue. Chasteen secured the clinch to start the round and fired a series of knees. He flurried with punches, backing Imazaki to the ropes. A left body kick from Chasteen was followed with an overhand right. Imazaki took deep breaths and began to back up. Chasteen worked the body and hurt Imazaki along the ropes. Chasteen fired multiple head kicks, but Imazaki would survive the round.

Between the second and third rounds, Imazaki was unable to continue, handing Chasteen the TKO victory.

“I’m not looking too pretty. He was an awkward guy. I was getting antsy, but I pulled out the win,” said Chasteen.

The Brazilian Pereira caught Lawson with a straight right hand at the opening bell and dropped her immediately. Lawson recovered, but Pereira swarmed her with knees and punches, dropping her again inside the fight’s first minute. Another big knee from Pereira caught Lawson clean on the jaw along the ropes and the referee stepped in to halt the contest.

“I’m very happy. I want to thank my brother because without him I would not be here,” said Pereira.

“She followed everything I told her to do in camp and in the ring,” said her brother Alex, the current GLORY middleweight and interim light heavyweight champion. “I’m very proud.”

Chicago was the host to the GLORY 71 SuperFight Series, which showcased a middleweight bout between Americans Tom Jenkins (4-2, 4 KO’s) and Andrew Navickis (3-2, 1 KO).

After a trade of low kicks, Jenkins powered Navickis to the ropes, landing a series of right hands. A low blow from Navickis caught Jenkins in the cup and the action was paused for a moment.

Jenkins closed the distance and landed a knee in the clinch. Navickis threw his overhand right repeatedly, but Jenkins used a high guard to block the shots. Navickis fired a spinning backfist that caught the gloves of the taller Jenkins. The fighters closed the round the same way it started with an exchange of low kicks.

Another low blow from Navickis landed to the cup of Jenkins in round two, again forcing a temporary halt to the action. When the fight continued, they immediately clinched and traded knees. Jenkins increased his punching output, connecting with a series of strikes.

A counter knee from Jenkins hit Navickis low and the fight was again interrupted. The action returned and a heavy right hand from Jenkins landed to the jaw of Navickis, sending him to the canvas. Navickis recovered, but Jenkins sensed the finish, pummeling Navickis with more right hands. A final shot sent Navickis to the mat again and he was unable to continue.

“I feel good, I feel strong. I lost my father two weeks ago and this was for him,” said an emotional Jenkins.

The SuperFight Series portion of GLORY 71 in Chicago kicked off with a featherweight clash between Liberia’s Arthur Sorsor (21-11-1, 9 KO’s) and American newcomer Matt Zilch (0-1).

Sorsor quickly closed the distance and landed punches. Zilch countered with low kicks. A heavy push kick from Zilch pushed Sorsor against the ropes. Zilch repeatedly landed a counter left hook and his confidence grew as the round progressed.

An uppercut from Zilch wobbled Sorsor from close quarters. Sorsor fired back, but Zilch changed levels with his punches, attacking the body of the more experienced fighter.

The second stanza opened with a heavy a left hook from Sorsor. Zilch answered with a right straight and reclaimed the center of the ring.

A flying knee from Sorsor just missed as Zilch saw it coming. Sorsor once again found a home for his lead left hook, forcing Zilch to step backwards for the first time. Zilch returned to working his body with punches. A heavy uppercut from Zilch landed on the break and he finished the round strong along the ropes.

The aggression of Sorsor was on display to start the final frame. He came forward with punches and got inside on Zilch. After a flying knee from Sorsor failed to connect, Zilch backed the Liberian into the corner.

A clean right hand appeared to wobble Sorsor. As Zilch increased his output, Sorsor caught him clean with an uppercut. He followed it with a big left hand, stumbling Zilch for a moment. The pair traded until the final bell.

The judges were divided, but it was Sorsor who left the ring with the win.

“I have to tip my hat to Matt. He’s a hell of a fighter. We put on a show,” said the victorious Sorsor.

“I expected a really tough fight from Arthur. I had a lot of experience of amateur and this was a good fight for my debut,” said Zilch in defeat.