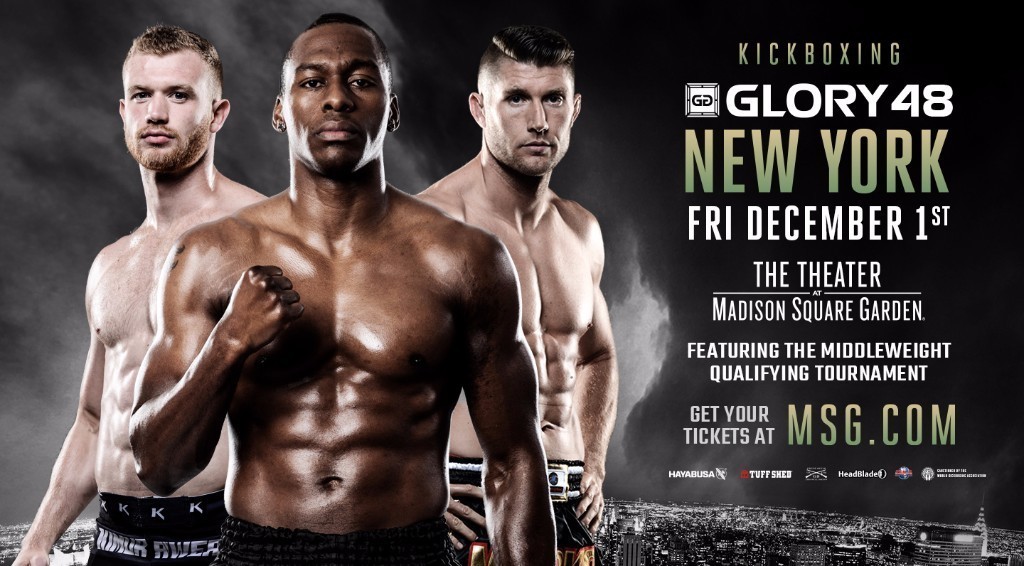 GLORY 48 New York has taken shape with the addition of six-year UFC veteran Thiago Silva and three of the four middleweights set to do battle in a one-night qualifying tournament at The Theater at Madison Square Garden on Friday, Dec. 1.

Silva, who will debut at light heavyweight, earned a reputation during his MMA tenure for carrying massive power, with 13 of 19 career victories ending via knockout.

In the first of two tournament semifinal match-ups, GLORY veteran Wayne Barrett (6-5, 4 KO, fighting out of the United States), who cut his teeth on the New York fight scene, returns to the GLORY ring for the first time in nearly two years. His opponent will be No. 7-ranked middleweight Robert Thomas (8-5, 5 KO, fighting out of Canada), who most recently earned 'Knockout of the Night' honors at GLORY 44 SuperFight Series in August. The pair of fighters have met once before, with Barrett edging Thomas by decision at GLORY 27 Chicago.

Mike "The French Rock" Lemaire (18-4, 8 KO, fighting out of the United States) will serve as one half of the other tournament semifinal match-up, with his opponent – the fourth and final tournament entrant – to be announced shortly. Should Lemaire advance to the tournament final round, he will seek revenge against either Barrett or Thomas, who each hold a win over the Muay Thai practitioner.

The previously announced featherweight title tilt between champion Robin van Roosmalen and challenger Kevin VanNostrand (16-1, 11 KO, fighting out of the United States) has been put on hold, as Van Roosmalen recovers from an eye injury. VanNostrand will remain on the card and meet the winner of this Saturday's featherweight contender tournament for the interim featherweight belt in New York. The tournament entrants vying for this interim title opportunity at GLORY 47 Lyon are Fabio Pinca, Anvar Boynazarov, Azize Hlali, and Abdellah Ezbiri.

The current fight card for GLORY 48 New York can be found below:

GLORY 48 SuperFight Series, the five-fight card taking place ahead of GLORY 48 New York, will feature the debut of recent roster addition Chris Camozzi and another appearance for New York’s own “Super” Elvis Gashi (19-0, 10 KO, fighting out of the United States), who stole the show by upsetting Josh Jauncey during the organization's last visit to The Big Apple.

GLORY 48 SuperFight Series is headlined by super bantamweight world champion and MMA fighter Tiffany “Time Bomb” van Soest (18-2-1, 6 KO, fighting out of the United States), looking to ride the momentum of August's knockout victory into her next bout against a top-ranked challenger. Like VanNostrand, her opponent will be determined this Saturday, when France’s Anissa Meksen, ranked No. 3, goes toe-to-toe with Turkey’s Funda Alkayiş, ranked No. 8. The winner will face Van Soest in New York.

The current fight card for GLORY 48 SuperFight Series can be found below:

One additional bout is expected to be added to GLORY 48 SuperFight Series.

GLORY will be donating a portion of ticket revenue and merchandise sold for this event to the Hurricane Harvey Relief Fund, benefitting victims affected by the recent floods.

GLORY will be working locally with promoter Lou Neglia and with Justin Blair's Friday Night Fights to bring New York this exciting evening of stand-up striking.