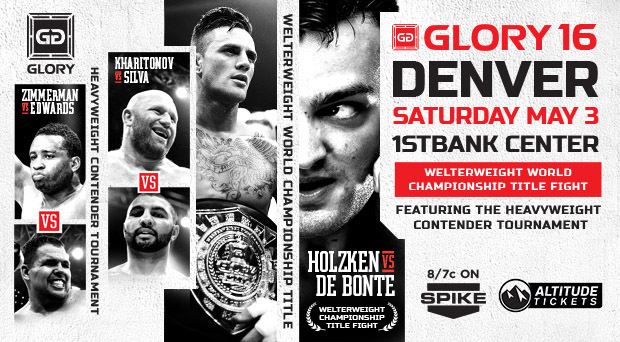 GLORY 16 DENVER takes place at the 1STBANK Center in Broomfield, Colorado on Saturday, May 3 and will air LIVE on SPIKE TV at 8 p.m. ET.

The event is headlined by a Welterweight World Championship Title Fight that pits #1 ranked Nieky ‘The Natural’ Holzken (84-11-0, 44 KOs) of the Netherlands up against Belgium’s Marc de Bonte (86-11-1, 28 KOs), currently ranked #5.

Originally scheduled for GLORY 15 ISTANBUL, the match-up between power puncher Errol ‘The Bonecrusher’ Zimmerman (101-11-1, 42 KOs) and knockout artist Bangin’ Ben Edwards (36-9-3, 32 KOs) now serves as one half of the Heavyweight Contender Tournament at GLORY 16 DENVER.

Winners of GLORY Contender Tournaments are awarded a spot in their division’s next World Championship Tournament, which has the World Title on the line.

The winner of the GLORY 16 Contender Tournament will be competing for the GLORY World Heavyweight Championship later this year.

Making his GLORY debut in the Contender Tournament reserve bout - the winner of which will step up should either of the tournament finalists be unable to enter the ring - is recently signed heavyweight Pat ‘HD’ Barry (15-5-1, 9 KOs). He takes on fellow newcomer and former professional boxer Zack Mwekassa (10-1-0, 9 KOs).

Tickets for GLORY 16 DENVER are on sale now at altitudetickets.com, by calling 303.893.TIXS and at Altitude Tickets’ kiosks located inside all Colorado Dick’s Sporting Goods stores.