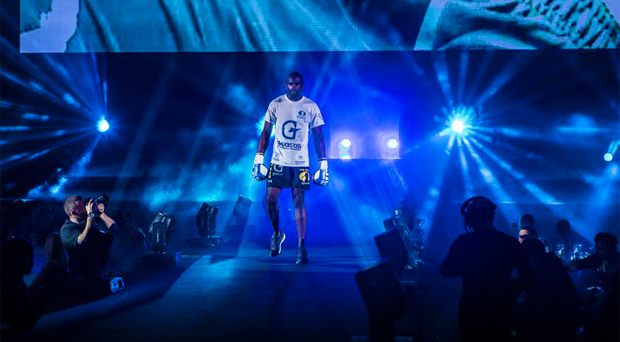 Murthel Groenhart, 26, was born in the former Dutch colony of Suriname in South America. He was a youngster when his family moved to the Netherlands and he has spent most of his life living in Amsterdam.

That is reflected in his music collection, which mixes modern urban genres such as hip-hop with more home-grown styles such as Surinamese reggae. “I also like house music and R&B but that is more for when I am on a night out,” says the lightweight contender, who faces Davit Kiria at GLORY 10.

“When I am getting ready for training or I am sitting in the dressing room preparing to fight, I like music which is going to hype me up, the ones that got that aggressive feel to it. I have a lot of tracks from Rick Ross and Meek Mills. They are two of my favourites right now” he says.

“This one is a little bit different. I like Jay-Z, I wouldn’t usually listen to something like Linkin Park but they go well together on this track. It was a huge track when it came out and its on my iPod now, and still gets played a lot.”

“Suriname is my home country. It has a lot of different styles of music. One artist I like is King Koyeba, he sings in a kind of a reggae/dancehall kind of style,” says Groenhart.

“Dutch is the official language of Suriname but you also have Sranan, the language you will hear most often from the people in the street, and King Koyeba mostly uses that, plus bits of English.”

In fact, Sranan - or Sranantongo, to give it its full name - is what is known as a ‘creole language’, a dialect which mixes several parent languages to become a fully separate language of its own.

‘Dutch House’ is one of the many subgenres of house. As the name suggests, it originates in the Netherlands. It’s a fairly new spin-off of the genre and is characterized by heavy repetitive percussion and lots of high-pitched synth noises.

Laidback Luke is a prime example of what Murthel might hear in an Amsterdam club when he’s on a night out: