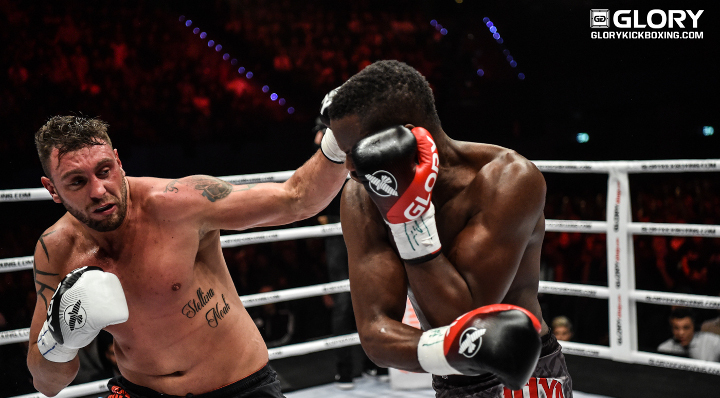 It’s Wednesday night, just over a week to go until his showdown with Zinedine Hameur-Lain (58-15, 37 KO’s) at GLORY 53, and Michael Duut (42-9, 19 KO’s) is barreling down the motorway from Amsterdam to his home city of Groningen after another hard days’s training.
The #4-ranked light-heavyweight commutes two hours in each direction every day. It’s a gruelling commute, but Duut says it is worth it just to be able to train under the eminent Melvin Manhoef.
Manhoef, a veteran of practically every major fight organization which has ever existed, still competes occasionally. But his main focus these days is on coaching his own fighters.
Duut became one just over a year ago, having previously been under the banner of the iconic Mejiro Gym.
“I’ve trained with a lot of different trainers over the years and Melvin is the best I ever trained with. He understands me like nobody else does,” says Duut.
“I don’t know, it’s hard to explain it. We have a connection. He said sometimes I remind him of himself. He has so much experience and he passes that on to me.
“I have a lot of trust in him, we have a good relationship. He says move left, I move left, says to move right, I move right, you know?”
Manhoef himself came up first under Thom Harinck at Chakuriki Gym and then under Mike Passenier at Mike’s Gym. Both teams have a philosophy of hardcore training in preparation for all-out aggression in the ring.
That same intensity can be found in the training room at the Manhoef Fight & Fitness facility in Amsterdam.
“I’ve trained like a madman. Really, I’m not joking. Crazy hard training,” says Duut, his voice rising in emphasis. One of his training partners has been Danyo Ilunga, his opponent in their ‘2016 Fight of the Year’-winning bout.
“Yesterday I was sparring with Danyo Ilunga. Man, it was like fight #4 between us! We went really hard. It was good sparring. He’s helping me with this fight and then I am going to help him prepare for his [GLORY 54] fight.
“Things are good between us, we had hard fights together but we are friendly to each other. This is a sport and we are sportsmen.”
Things are less friendly between Duut and the #3-ranked Hameur-Lain.
“I saw he said some things in interviews, social media.. ah, let him talk. I don’t care about that,” says Duut, referring to Hameur-Lain’s recent comments.
“I do my talking in the ring. I’m not going to make any response, only next week we will see each other in the ring, just the two of us, and then I will do my talking, you know?
“I am prepared for war - one round, three rounds, extra round, whatever. I’m ready for war and I hope he is too.”
Duut vs Hameur-Lain face off at GLORY 53 LILLE next Saturday, May 12 at the Zenith de Lille in Lille, France.
Their fight forms part of the GLORY 53 main card and airs live in the US on ESPN, Ziggo Sport in the Netherlands and SFR 5 in France.