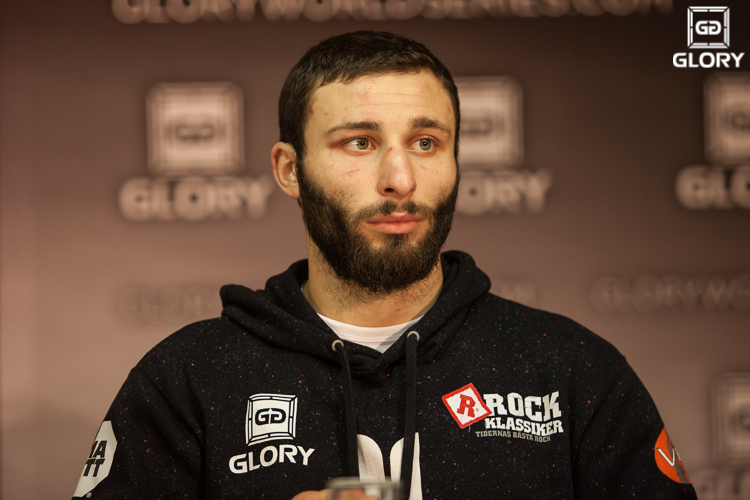 Lying directly on the border of Asia and Europe it has found itself the crossroad of empires. Soldiers have crisscrossed the landscape since antiquity, from the Mongolian hordes led by Genghis Khan to the legions of the Roman Empire and thence to the massive armies of the Persians. It was the Romans who first began referring to the Georgians as Georgians - they call themselves Kartvelians, reference to an ancient tribe.

One legend has it that the Georgians are so called because of their reverence for Saint George, the Christian icon and Roman soldier who reputedly slew a dragon that was terrorising innocent villagers. George became the patron saint of soldiers and in particular of the Crusader knights who took holy vows crossed continents on horseback.

At first glance this slight detour into medieval history does not seem to have much to do with a modern elite kickboxer, until one meets Davit Kiria. For the 24-year-old Kiria is native of Georgia and embodies much of his land’s martial sprit. Not only does he travel the world fighting for Glory, he sports a thick black beard which immediately conjures up the image of those early Crusaders setting out on their quests.

Our first encounter with Kiria this day sees him strolling through the reception of the four-star Columbus Hotel overlooking the harbour in Monte Carlo, Monaco. The sharp lines of his face and physique are a stark contrast to the soft furnishings and muted lighting which form his backdrop. At the same time there’s a softness to his eyes, two huge pools of total calm, which takes some of the hardness out of his face and makes him look almost melancholic.

Likewise his manner of speech is thoughtful, considered. Not just because he is speaking in a second language and having to search for the right words, but because he genuinely thinks about what he is saying and weighs his thoughts before uttering them. Right now his mind is on the upcoming draw to determine the opening matches for the GLORY Final 8 tournament taking place in Rome on November 3.

“For me it makes no difference,” Kiria says when asked which of the other seven he would be prefer to be matched with first. The GLORY Final 8 is a one-night elimination tournament in which the winner will fight three times, but the opening round matches are significant because they will determine the difficulty of each fighter’s potential route to the top.

“First and foremost I am happy to say that I am GLORY fighter. Its now the new number one organisation and all the fighters there are very strong, so I am very happy to have been invited to the tournament. I respect all my opponents of course and maybe I am not so well known, but I am going in there to win,” explains Kiria.

“Some of them are top fighters, champions, and others are not so well known but for me they are all the same - and I am going to win. I think only about winning. Petrosyan is the world number one and I respect him very much but if I face him I will win. Points or knockout? I don’t know, but I will win. I am one hundred per cent sure. And whoever wins the Glory tournament will be the world’s number one.”

Petrosyan is nicknamed The Doctor because of his surgical precision in the ring and opponents have had extreme difficulty even scoring cleanly on him, never mind trying to take him out. There is only one defeat on his record and Petrosyan says that is the result of him being drugged by an unscrupulous promoter in Thailand before a fight with a local champion. So how does Kiria propose to topple him if they meet?

Kiria responds with a shrewd look and the hint of a smile. “Well, I feel like I have seven opponents in this tournament, not just him. It is me versus the seven other fighters and I have some gameplans of course but I never say, because the tactics are all different and I don’t want to say something about my plans. They will find out in the ring.”

Kiria’s total calm and introvert manner is fairly anomalous in fightsports, which more often than not finds itself attracting the more extrovert personalities. The people of Eastern Europe are generally quieter than those of the West anyway, but Kiria also comes from the rigid worlds of Ashihara Karate and the Eastern Orthodox Church. Neither are known for encouraging levity in their adherents.

It was five years ago when Kiria’s success in the karate world - including the winning of a serious European title - caught the attention of Semmy Schilt and his coach Dave Jongers. They are also Ashihara Karate men and they saw potential in the Georgian. So he made the trek west and landed up the northern Dutch town of Zuidlaren, where he conducts his training camps.

Schilt is the top heavyweight fighter in the world and the current GLORY heavyweight champion. Standing 2.12 m (6 ft 11.5 inches) and weighing 132 kilos he is also the biggest fighter in his own division. So imagine what it is like for Kiria, standing 1.7 metres and weighing 70 kilos, to have to spar with him.

“Ha, its very difficult for me but I try my best,” he laughs. “I’m punching and kicking him very hard but its very difficult for me because he is so tall. But we train every morning and evening together. He helps me prepare but of course isn’t punching or kicking so hard because I am a lightweight and it would be too easy for him. But we can train together, its good.

“Two times a week we train in the gi, traditional karate. I will never stop this, I am a karate fighter for life. Its similar to kickboxing except that we don’t wear gloves and so we are hitting below the neck, but very hard. You have to be tough for this style, Ashihara is a hard style. You take some hard hits but it makes you tough. Its important to me to show that Ashihara is a good fighting style and that it can be used with success in the ring.”

Since becoming a professional kickboxer on the international circuit the young Georgian has also cross-trained in Muay Thai, the national art of Thailand, just because that discipline is the basis of so many modern kickboxer’s styles. For a Kiria its a case of ‘know thy enemy’ rather than a desire to become a Thai boxer himself. He has spent time training in Thailand but, in contrast to almost every other fighter who has done the same, says he doesn’t like the place.

“Actually I don’t like Thailand. Its too noisy. The people are nice and the training is very good but the noise is all the time. Even at night,” he says, mimicking the chirrup of the birds and grasshoppers that serve as Thailand’s nocturnal orchestra. “And Bangkok… For me I don’t like big cities at all. I find them very tiring. So many people, so much movement and light and noise.

“When I come away from time in the big cities I feel very drained, it takes something out of me I think. I am from a small town and this is the life I am used to. Even when I go to Holland for training with Semmy I am in a small town like back home, its not a huge place like Amsterdam. I cannot stay too long in a big city like that.”

By now Kiria has left the swish Monaco hotel and has made his way to the harbour, where the $20million super-yacht Andreas L is moored. The yacht - which makes five-star hotels look shabby - will be the scene of the official draw to determine the opening round match-ups. The draw takes place against the backdrop of a bright blue see and myriad millionaire’s boats riding the waves. Kiria is matched with Shemsi Beqiri; the other match in his pool has Petrosyan versus American prospect Ky Hollenbeck.

After the draw, the yacht hosts a party for the attending guests and VIPs. The night-time harbour has a huge GLORY logo projected onto it and the DJ’s records are periodically drowned out by the sounds of champagne corks popping. Everybody is having a good time but Kiria is here strictly as an observer.

“You wont believe me, but never in my life was I inside a nightclub. I can see you don’t believe me, but its true! For me its like the big cities, its too much noise and confusion. Its not my idea of a good time. I swear to you this is my first time in such an environment,” he says.

True to his word, he doesn’t touch a drop of alcohol at the party. He wanders from room to room clutching a cola, his  crumpled suede jacket giving him an academic air, watching all but saying little. At one point he sits down at an open laptop and begins browsing the internet. He comes across a thread about himself on the Sherdog forum, a major martial arts messageboard based in the US.

The thread likens Kiria to Andy Hug, a star of the early days of K-1 in Japan. Like Kiria, the Swiss heavyweight Hug was a karate stylist and he endeared himself to the Japanese fans by using techniques fro their traditional art against the Muay Thai stylists who populated the sport. Kiria shares that tendency to deploy unorthodox attacks such as the axe-kick. He also the same unique sense of timing and distance that top karateka such as the UFC light-heavyweight Lyoto Machida demonstrate.

While reading the messageboard, Kiria notices that one member has posted a message saying that, while he likes Kiria, he doesn’t think he can win the tournament so long as Giorgio Petrosyan is in it. Kiria stares hard at the screen and particularly zeroes in on Petrosyan’s name. His eyes narrow and for a moment I am sure he is going to bare his teeth, animal-like. Its an unexpected switch of mood and focus.

“This guy.” he says, wagging a finger at Petrosyan’s name on the screen as if admonishing the world number one directly for having the nerve to show up in a thread dedicated to Kiria. “This guy… I’m going to show him something. I will show him something.” He smiles and shakes his head before standing and walking away, shooting one last look at the offending screen as if expecting to catch Petrosyan climbing out of it.

Of course he doesn’t; at that very moment the Armenian-Italian is holding court in the next room. But Kiria and Petrosyan are in the same pool for the Final 8 and if they win their opening matches they will meet each other next. If they do, we will find out just what it is that Kiria wants to show him.