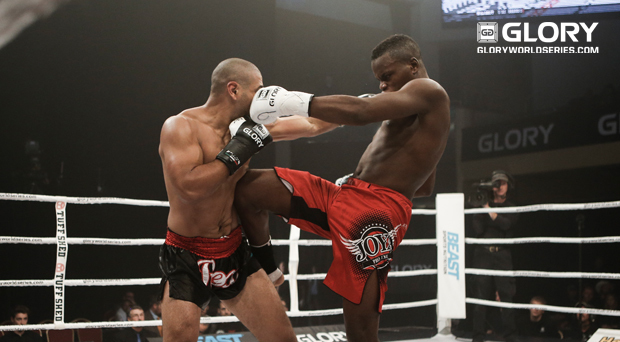 Former world #1-ranked light-heavyweight Danyo Ilunga (56-6, 44 KO’s) has signed a new deal with GLORY and will return to the ring at GLORY 25 MILAN.

He is going straight back in at the deep end and wasting no time in getting on the title shot trail. In Milan he will face Russian prospect Artem Vakhitov (13-5, 5 KO’s) in a three-round fight set for the Superfight Series section of the card.

Ilunga’s last GLORY appearance was in the semi-finals of the Light-Heavyweight Contender Tournament at GLORY 18 OKLAHOMA in November last year. He had a hard fight with Saulo ‘Cassius Clay’ Cavalari and lost a decision.

Cavalari won the tournament and earned a title shot but contract wrangles with Gokhan Saki meant the title shot was delayed. The Brazilian instead faced Vakhitov at GLORY 20 DUBAI in April and also won by decision after a hard-fought bout.

This past Saturday, Cavalari won the vacant World Light-Heavyweight Championship on the joint Bellator MMA/Glory Kickboxing event ‘Dynamite’ after winning a majority decision against Zack ‘The Black Warrior’ Mwekassa.

Ilunga (6-2  in GLORY) and Vakhitov (3-1 in GLORY) are both strong contenders and both are keen to avenge their loss to Cavalari. The fact that the Brazilian is now wearing the world title belt around his waist only makes them keener to fight their way to a rematch.

The road to that rematch begins in Milan and they are standing in each other’s way. Whoever wins will see his name writ large in the contender listings while the loser will be knocked back in the queue. This is a key bout in the careers of both fighters.

“These two are potential title challengers in the future. Right now we are working on getting a new deal in place with Saki and if we can come to an agreement then Saki will be the first to challenge Saulo Cavalari for the belt. But I think the winner of this fight between Ilunga and Vakhitov can also find himself in that conversation,” says GLORY matchmaker Cor Hemmers, Head of Talent Operations.