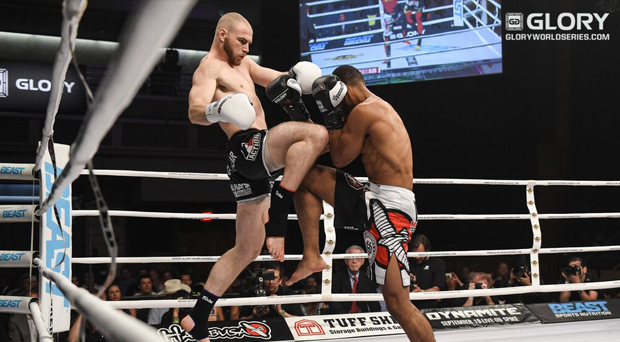 Agreements are in place for the pair to clash in the headline bout of the GLORY 65 UTRECHT Preliminary Card.

Van Heeckeren trains and fights out of The Colosseum Gym in Utrecht, where his teammates include fellow GLORY middleweight Jason Wilnis and lightweight prospect Tyjani Beztati.

He has a 1-1 record in GLORY, having won his GLORY 51 debut by way of first-round knockout but then dropped a unanimous decision to Donovan Wisse at GLORY 59.

Baker (pictured) is 3-1 in GLORY and rides a two-fight win streak into this bout, with both of those wins coming by way of stoppage.

Ranked #7 at middleweight, Baker fights out of Team Black and trains under Dan Black, who has previously served as stand-up coach to the UFC’s Nick and Nate Diaz, among others.

In addition to the bout agreement for this fight, Baker has also this week signed a new contract with GLORY, a multi-fight long-term deal which will carry him through 2019 and beyond.

The unique Central Studios venue means tickets are in extremely limited supply and are selling out fast. Click here to check availability and buy tickets.