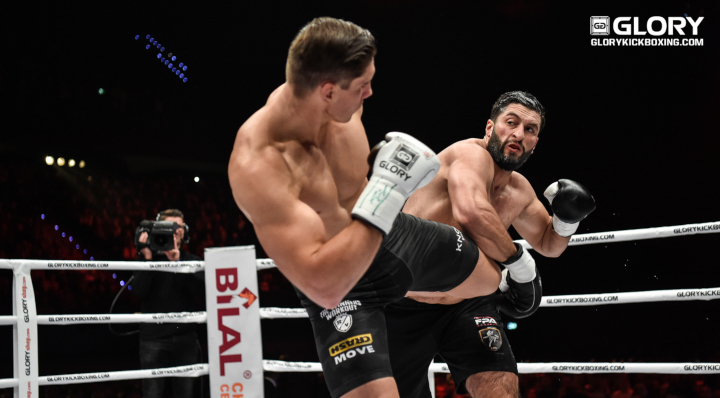 Ben Saddik: “I will really surprise Verhoeven in a rematch”

Jamal Ben Saddik is looking for a title shot rematch with heavyweight champion Rico Verhoeven “as soon as possible” following his win in the GLORY 62 ROTTERDAM 8-Man Heavyweight Grand Prix last weekend.
“The important thing for me is that the fans enjoyed the night and I can get my title shot. Money is the last thing I was thinking about,” he says.
“Me and Rico are now 1-1 [against each other] so that was the most important thing, the title shot.”
Ben Saddik beat Junior Tafa and Guto Inocente in back to back matches. He then stopped Benjamin Adegbuyi in the tournament final via a series of crunching left hands from a southpaw stance.
Orthodox by nature, Ben Saddik changed stances for the tournament final because he suspected he had damaged his right hand. The change threw Adegbuyi off.
“As soon as I landed the first big left hand I knew he was done,” says Ben Saddik of the first-round finish. “I have a very good left hand, I just don’t use it very much.”
When the rematch comes around, does Verhoeven now have to factor ‘Jamal Ben Southpaw’ into his gameplanning?
“I am now much more experienced than before. I can fight left side forward, right side forward,” he says.
“So I am going to surprise him next time. I’m really going to surprise him.”
Verhoeven, the longest-reigning champion in GLORY history, won the belt at GLORY 17 LOS ANGELES by beating Daniel Ghita and has held it ever since, making a total of eight defenses.
At GLORY 49 ROTTERDAM he defended against Ben Saddik in a thrilling encounter which saw Ben Saddik badly rock the champion in the first round only to fall victim to a fifth-round stoppage himself.
Back in 2011, early in their careers, Ben Saddik stopped Verhoeven on the preliminary card of an event in Holland. They are now 1-1 against each other and any rematch would be a tie-breaker as well as a title fight.