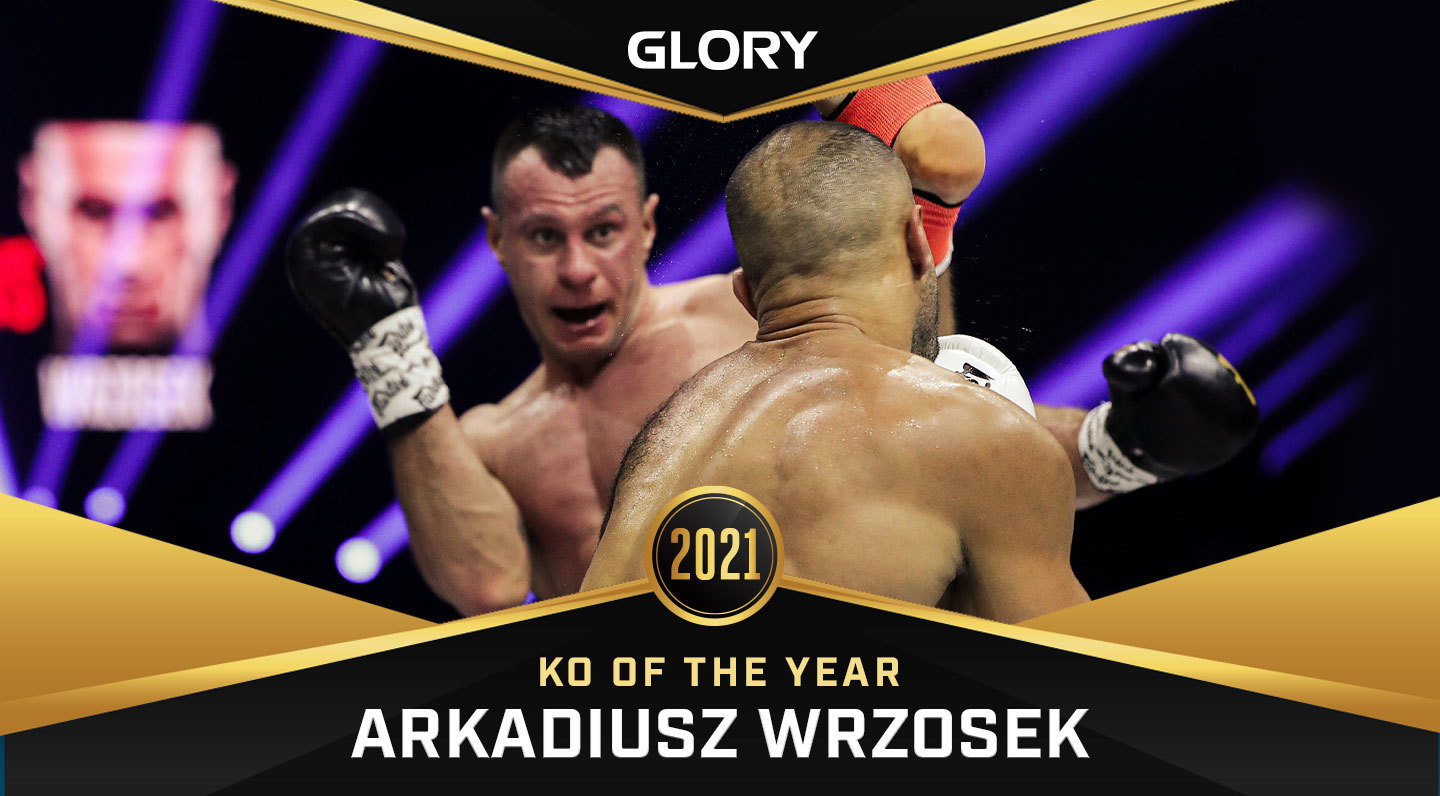 We sat down with the winner of the "2021 KO of the Year" award, Arkadiusz Wrzosek.

What are your roots and where do you live today?

I live with my family in Warsaw, my hometown. I was born and I grew up there. I love this city and I think I will spend the rest of my life there.

How did you get into kickboxing?

I started playing sports when I was 7 years old. I played football first, then I played a little bit of table tennis before going back to football. I was 18 when I started training in kickboxing. I wanted to fight better. I wanted to gain strength and grow muscles, because that's important when you are a Legia Warsaw supporter. I did my first amateur tournament, then my second, then my first professional fight, etc. And here I am today.

Do you have other hobbies besides kickboxing?

Everyone knows I'm a huge Legia Warsaw fan, it’s my second passion in my life. When we play in the Europa League, I try to follow the team with my friends. I’ve been everywhere with Legia in the last 11 years. I also like to play video games on the PlayStation, especially Warzone.

If you had to choose between Legia Warsaw winning the Champions League and you winning the GLORY Heavyweight Championship, what would you pick?

Oh man, that's a really difficult question! But I think my own career is more important to me. Legia Warsaw players come and go so the GLORY Heavyweight Championship would be my pick. 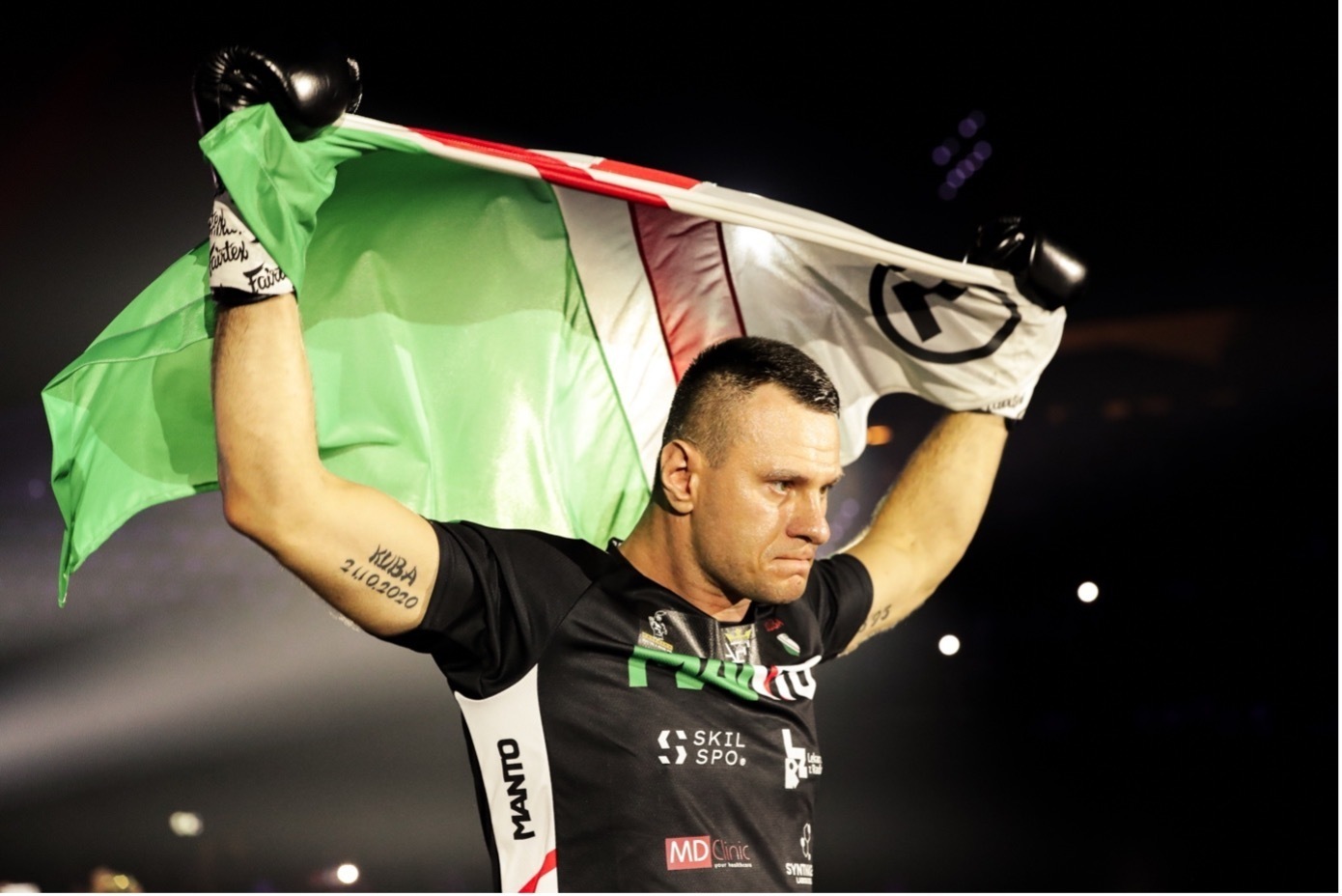 Wrzosek walks out with a flag of Legia Warsaw.

How would you describe yourself as a fighter?

I love kicking. I trained in Muay Thai in Thailand for two months. Everyone tells me that I have very strong kicks. I finished 9 of my fights by KO and 7 of them with my kicks. I’m flexible and I can kick from any position. I also think my boxing is getting better every year. I have a good mindset when it comes to fighting: I feel no fear before or during the fight.

You always wear colored ankle tape during a fight, why is that?

That's something I always do. I've seen it in Thailand, Thai fighters often wear it. It has now become a habit. I have a few other habits I do before every fight. For instance, I’m sure every fighter has his lucky underwear. I also wear my lucky underwear under my shorts for every fight. And when I'm backstage right before getting in the ring, I always yell at myself. I prepare myself for war.

What was your first reaction when you found out you were going to fight Badr Hari in the main event?

At first, I couldn't believe it was going to happen. I thought GLORY was asking every fighter about it and I was just one of the options, because Badr Hari only fights big fights. You have to deserve it to be able to fight against Badr. When I got the message from GLORY, I was very excited. But I knew I had to focus on my training and forget it was a big fight against Badr.

At the end of the weigh-ins, Badr Hari pushed you. What was your reaction?

I was negatively surprised because we didn't need this for our fight. We didn't have to pretend that we don’t like each other. But I don’t care, it gave me extra motivation. He put extra pressure on himself.

How did the fight with Badr Hari go according to you?

I was very stiff at the beginning of the fight. I hadn't fought in almost two years. I couldn't feel the distance, find the right tempo, or hit him. I tried throwing some jabs, but I kept missing him. I wasn’t myself. In the second round, I felt better. I started the round normally, but after a few seconds he hit my body again and I went down. If you are knocked down by a body punch, the next body punches are deadly. I was damaged, so I couldn't show my skills or what kind of fighter I am. If I had had another fight before this one, I wouldn't have been so stiff and I would have displayed what I am capable of. 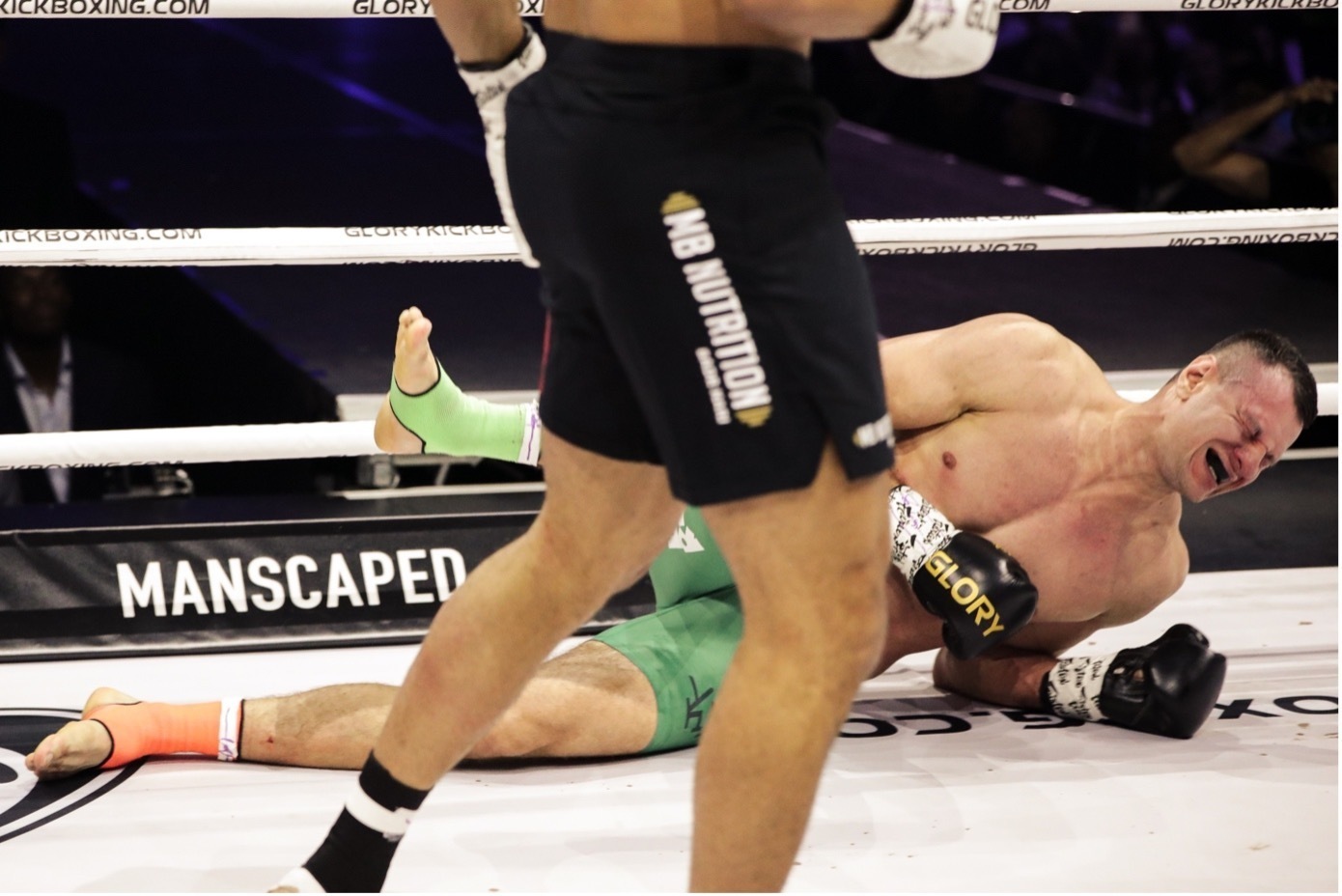 Wrzosek goes down against Badr Hari at GLORY 78.

At the beginning of the fight, it seems like you let Badr come close to you. Was your game plan to counter him?

Yes, Badr is the best fighter in the world. I knew that if I tried boxing with him, it wouldn't go well for me. He’s a monster. So, I waited for my chance to knock him out with a counterattack, and I did it. My coach said it, Nick said it, my sparring partners, everybody said it: “You have very good counterattacks, you have to try and catch him.” It’s not a secret. You can watch his old fights. If somebody goes to war with him, they get knocked out.

Was he close to finishing you, or did you always think ‘I can keep on going’?

The first knockdown was the worst. I thought “This is it” maybe for a second, but I recovered quickly. On the third knockdown, he was close to finishing me, but I've fought and come out of worse situations. The punches were strong and deadly, but not strong or deadly enough for me.

You delivered a head kick to Badr. Did you know right away that this move would end the fight?

There were too many emotions in the ring, and I can’t remember what I felt or thought. I didn't know if he would give up or get back up. After a few seconds, when I saw him trying to get up and falling again, I knew I had won the fight. But I don’t remember the first 5 minutes after the fight because of all the emotions.

You were training and repeating the kick in your locker room right before the fight. Was that kick specifically planned to beat Badr?

No, I also caught Benny Adegbuyi with that kick in the third round except I lost that fight. I caught many fighters with this kick. It’s a difficult kick to defend. But we trained many different counter techniques, that head kick was just one of them. We had many ways to stop him, and I’ll just save them for future fights.

Many people say this may be the greatest comeback in kickboxing history. What do you think about it?

If I look at it as a kickboxing fan, this comeback was insane. It was crazy. I don't know if anyone has ever done anything like this before in kickboxing. Maybe in small fights in other countries, but not in a Badr Hari fight. But this is the heavyweight division. My knockout is the best description of the heavyweight division. Anything can happen. 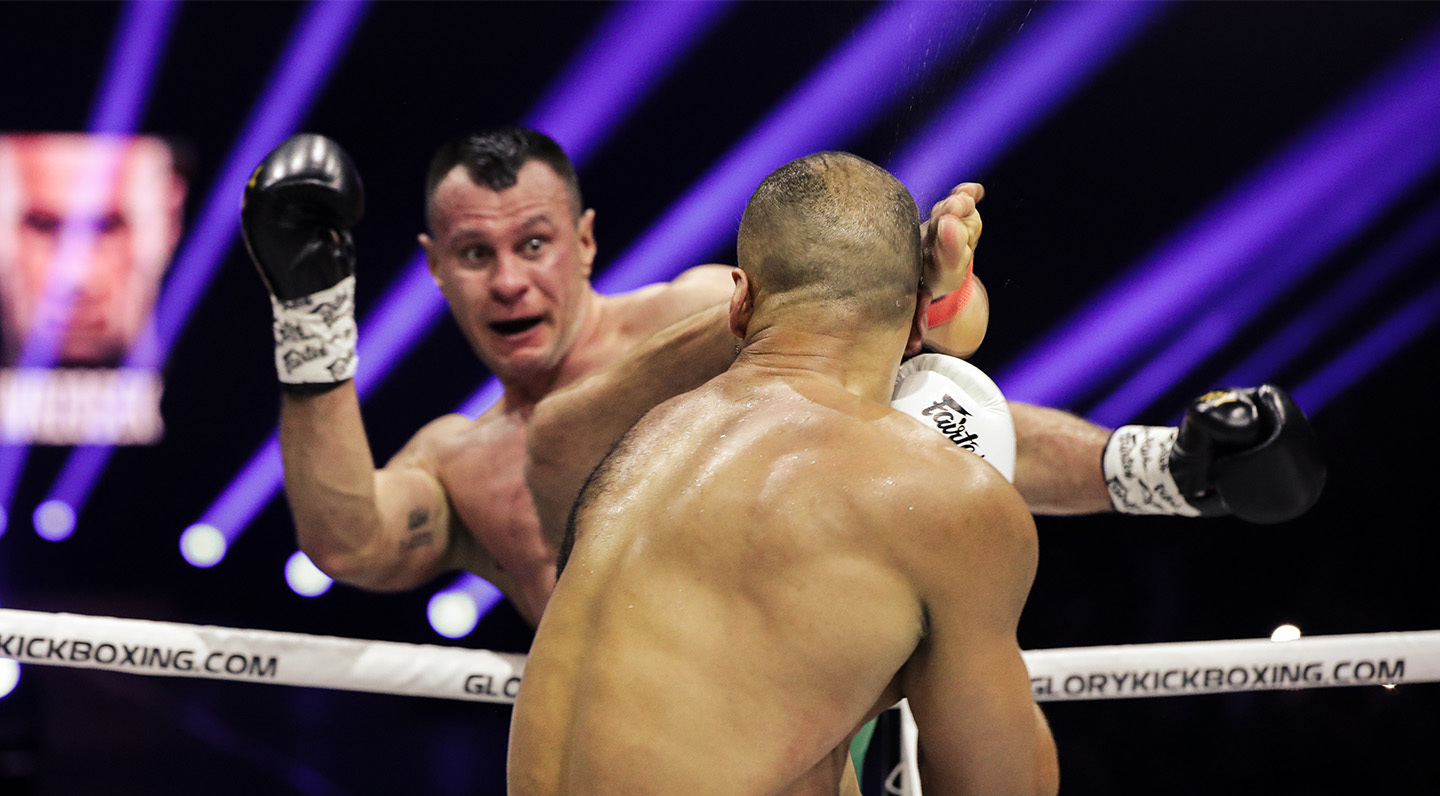 Wrzosek's "KO of the Year" against Badr Hari at GLORY 78.

Badr Hari recently commented on Instagram that he wants a rematch against you. Did you see that? What was your reaction?

Yes, I saw it. I expected him to want that, it’s normal. He was winning the fight, he lost by knockout, so he wants revenge. Everybody is asking me about a rematch, but not GLORY. Badr wants a rematch, his Moroccan fans want a rematch, everybody. Sometimes, his fans comment on my posts saying I don't want a rematch, but it's not true. No one has asked me about the rematch. I'm just waiting for a message from GLORY. If they want me to fight Badr again, no problem. If they want me to fight someone else, that’s fine with me as well.

What changed in your life after the win? Are you more famous now?

Before that fight, everyone knew me in Warsaw. And now, people from all over the world know about me. New sponsors and new fight proposals in kickboxing and outside of kickboxing are coming in. I am especially proud that I have made kickboxing more popular in our country. Now, everyone in Poland is asking “What is GLORY? Who is Wrzosek? Who is Badr Hari?”.

Who do you want to fight next?

There are many good fighters in the heavyweight division. I hope I can fight Plazibat in the future. He’s very good and the number one challenger in the division. We were supposed to fight each other twice already, hopefully it will happen one day. Right now, every fighter at the top of the division is a very exciting opponent for me, so it doesn’t matter who I fight.

Looking at the fight between Rico Verhoeven and Jamal Ben Saddik, what would you have done differently to beat the King of Kickboxing?

That fight was amazing! Rico showed he is a real warrior. I knew that Jamal is a monster and that this might be the toughest fight of Rico's career. It’s difficult because Rico is a complete fighter. I have many ideas on how to beat him, but I need to make a good game plan with my coaches. For Rico, I’d need the best preparation of my life. He's a very tough opponent, but it's the heavyweight division! I can lose five rounds, but I can still knock him out with one punch at the end.

Do you have a message for the GLORY fans?

Remember my name and next time, watch my fight without blinking.