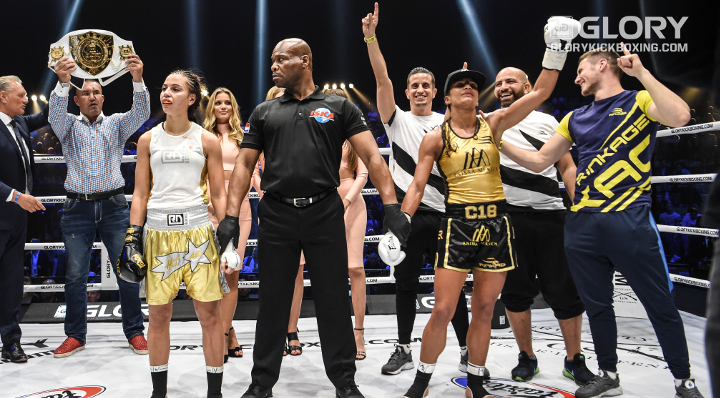 “I will remain the champion for a long, long time,” said Anissa Meksen after retaining the world super-bantamweight championship at GLORY 53 LILLE.
She took a unanimous decision over Amel Dehby in the co-main event, winning all five rounds according to four of the judges and four of five rounds according to the remaining judge.
To be fair to Dehby, the scoreline does not reflect how competitive she was in the fight. It was closer than a simple reading of the scores suggest.
Still, Meksen says she never felt troubled. “I felt like I was a level above, you know? She didn’t hurt me with anything,” said the champion.
Meksen’s ring generalship and superior movement were her keys to victory, allowing her create angles and counter-attack after evading Dehby attacks.
Dehby frequently found herself hitting at air as Meksen would get in, land her shots and get out just as Dehby’s counter-attacks were launched.
It was frustrating for Dehby to find herself missing by millimeters again and again. But when she did land, she landed well, with some impressive combination work of her own.
Still, Meksen was the clear winner by the end of the fight, rendering the judges’ decision a mere formality after five rounds.
The question now is, who will challenge Meksen next? Former champion Tiffany van Soest wants that belt back but needs a win to put herself in contention.
An immediate challenger not being obvious, Meksen has suggested that GLORY open a new weight class for her several pounds higher, which would give access to a whole new talent pool and, more importantly for her, give her the chance to be the first fighter in GLORY to defend belts in two different weight classes simultaneously.
Anissa Meksen def. Amel Dehby, Unanimous Decision, R3 3:00 (49-46, 50-45, 50-45, 50-45, 50-45)