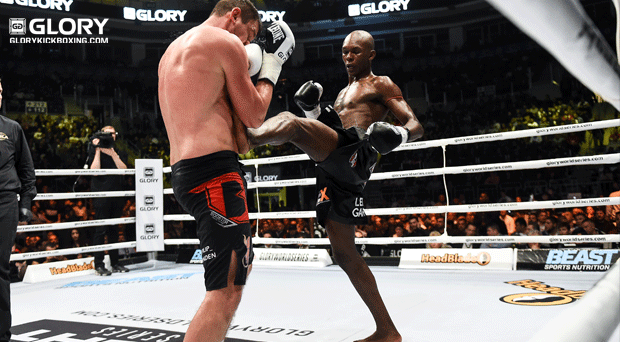 Israel 'The Style Bender' Adesanya (31-2, 14 KO's) is not mincing his words when it comes to talking about his return to GLORY Kickboxing later this month.

The New Zealand-based middleweight is set to take part in the GLORY 34 DENVER Middleweight Contender Tournament on October 21, a four-man affair which grants a title shot to the winner.

Not only convinced he will be victorious, he gives the impression that the other three competitors have no place being in there with him. Everyone is being put on blast.

“I'm coming there to shake the place up and claim the throne. I already put them on notice, they know I'm a threat,” he says. “I'm not like these other guys. A lot of them fight like punching bags with arms, they sit there ready to take shots. I fight smart and use my full range of skills to shut guys down. I adapt, adjust and overcome.”

In the semi-final stage Adesanya will face Robert Thomas (8-4, 5 KO's) of Canada, while the opposite bracket hosts Ariel Machado (43-7, 33 KO's) of Brazil against Yousri Belgaroui (18-1, 9 KO's) of Amsterdam, Netherlands. He and Adesanya fought recently, with Adesanya taking a decision win which Belgaroui hotly disputes.

“I feel nothing,” says Adesanya when asked how he feels about Thomas. “He is good at what he does, but he goes at one pace and is one-dimensional. I am 'The Stylebender' - I can adapt and switch it up at anytime. The shinobi ways confuse them when they are in there with me.

“I'm not even sure why Belgaroui is in this tournament. I'd never heard of this guy up until a couple months ago. He's not a top ten fighter. In my country he would be a good amateur or B-class fighter. He still does so many fundamental things wrong! He's been pushed into the big leagues too fast by his team. Learn to walk before you can run.

“I beat him and I had one of the worst fights in my career! I actually think he's in here because I helped him by fighting such a bad fight and making him look better then what he actually is. His trainer asked me after the fight to help him get the kid into GLORY, so him and Mike [Passenier, Belgarouri's coach] can thank me later.

“The Mike's Gym style is tailor-made for my game. This sport is about hitting and not getting hit, the true science of fighting. If you want to take shots to give shots then I'll oblige you.”