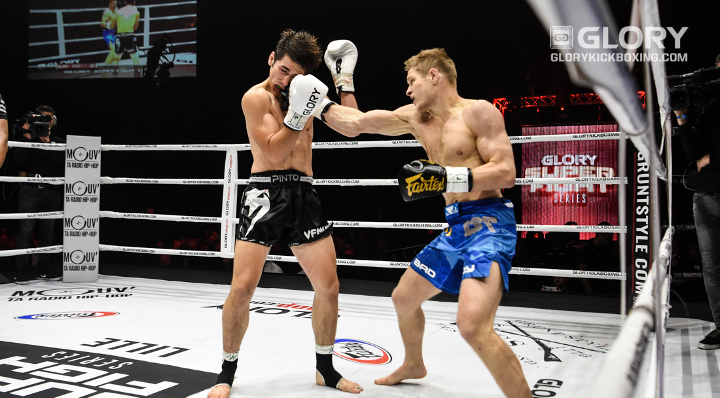 A spinning backfist knockdown of Victor Pinto was the key to victory for Serhii Admachuk in the GLORY 53 Featherweight Contender Tournament.
The former featherweight champion set the shot up beautifully midway through the middle round, backing Pinto up in a straight line then pirouetting his full bodyweight neatly into Pinto’s jaw.
Pinto went down heavily and for a moment it looked like the fight might have been finished there and then. But he took his time, regained his feet on the referee’s count of eight and then re-entered the fray.
Adamchuk did his best to finish Pinto off but the Thailand-based Frenchman gritted it out and got back into the fight. In the final frame, he knew he had to knock Adamchuk down, if not out completely, and he went after it with a will.
That played well for Adamchuk; he is happiest when he is playing matador against an opponent who is pressing forwards, so he was able to use the final round to display some of his fine footwork and tricks.
Adamchuk set the tone of the fight in the very first seconds of it when he touched gloves with Pinto then instantly cracked him with a left cross that snapped his head back.
Pinto broke out in a broad grin and fired off two spinning back kicks in a row. The cautious tactical approach we had seen in their respective semifinal bouts was nowhere to be found.
After being announced as the tournament winner, Adamchuk took receipt of the Ramon Dekkers Memorial Cup.
“This isn’t just for me, this is for my whole team,” he said. “Ramon Dekkers is an inspiration and its an honor for me to have this.”
The win now puts Adamchuk back in the title contender picture, although not yet into an immediate title shot.
In the tournament’s opening bout, Pinto got past GLORY newcomer Buray Bozaryilmaz by way of majority decision, despite having a point deducted in the second round for sweeping Bozaryilmaz’s legs out Thai-style and sending him to the canvas.
That deduction was more than a little ironic given that Bozaryilmaz had in the first round executed all manner of trips, dumps and blatant throws, inviting several interventions from the referee and a stern warning.
Lumpini-style shenanigans aside, Pinto had the cleaner striking of the two and landed the better shots, particularly in the final round, and that booked him his spot in the final opposite Adamchuk.
Similar scrappiness was evident in Adamchuk’s semi-final bout with Azize Hlali, although in this fight it was only one fighter - Hlali - who was playing fast and loose with the rule book.
He got a point deducted for almost completely flipping Adamchuk and dumping him on his head in the second round.
Adamchuk was unflustered by the blatant foul and remained unflustered by Hlali’s efforts over the coming rounds, staying squarely in his comfort zone as he cruised to a decision win and a spot in the finals.
It is Adamchuk’s first victorious Contender Tournament in GLORY. He came runner-up in the GLORY 39.