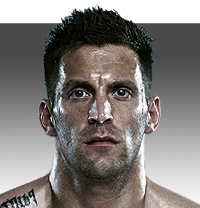 Steve Wakeling is so good that for the last few years he has been rendered almost inactive through a combination of inadequate opposition and promoters using lower-ranked fighters because they were cheaper.

Now signed to GLORY, Wakeling is keen to make up for lost time and you only have to look at the complete demolition job he did on Eddie ‘Showtime’ Walker in his debut at GLORY 5 LONDON to see why people have been doing all they can to avoid fighting him.

A traditional Muay Thai stylist, Wakeling brings destructive power and iron toughness to his fights, along with the exquisite use of timing and misdirection that characterizes the elite Thai players. Wakeling is also known for his superb conditioning and relentless attacking style.

In October 2012 he faced Artem Levin of Russia, widely considered the top fighter in the world at this weight. Wakeling was coming off a long layoff but brought the fight to Levin and most observers seem to feel he won. Instead the fight was ruled a draw and thus was rendered an inconclusive clash. The two are likely to rematch under the GLORY banner in what will be a highly-anticipated encounter.

Wakeling comes from pedigree fighting stock. His father Mark was a successful fighter in his own right and had a career which culminated with a fight in Thailand’s prestigious annual King’s Cup tournament in 1998. Steve’s brother Mike Wakeling has also won titles at European level - this is a proven bloodline when it comes to the fight game.