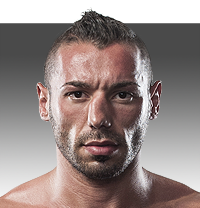 
Shemsi Beqiri was born in Kosovo to Albanian parents. His parents then moved to Switzerland to find work and, when Shemsi was five years old, they sent for him and his brothers. He has lived there ever since.

A quick glance at European history shows that Switzerland, Albania and the Balkan region were known for producing the best soldiers in the medieval world - with a heritage like his, it’s no wonder Beqiri became a professional fighter.

In his teens Beqiri became obsessed with kickboxing. He was a huge Albert Kraus fan so he acquired an old car and, with his three brothers in tow, drove all the way to the Netherlands to train at SuperPro, home of Kraus and his trainer Dennis Krauweel.

They repeated the trip several times, soaking up knowledge and eventually opening their own SuperPro branch in Basel, Switzerland. Beqiri and his brothers are all professional kickboxers and also coach their own fighters.

Switzerland shares a border with northern Italy and Beqiri isn’t far from the home town of all-time lightweight great Giorgio Petrosyan. The two are close friends and have trained together numerous times.

Beqiri was part of GLORY’s 2012 lightweight tournament. He made it to the quarter-final stage before losing a points decision to karate stylist Davit Kiria. Fans declared it to be one of GLORY’s 2012 Fights of the Year.