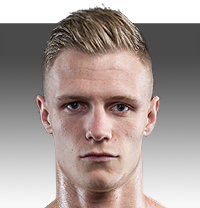 McAllister is a bright young talent from the North-East of England, an area with a strong Muay Thai pedigree. His training partners include elite kickboxers as well as the likes of UFC veteran Curt Warburton.

He is very skilled and very confident. The GLORY lightweight division is one of the most stacked in all of fight sports and McAllister says he “can’t wait” to test himself against the likes of Giorgio Petrosyan, Robin Van Roosmalen, Albert Kraus and Murthel Groenhart.

“I’m not afraid of anyone. Everybody is human at the end of the day, Petrosyan or anyone else, everyone can be beaten on their day,” he says. “It is exciting rather than intimidating. This the level I want to be at.”

McAllister has beaten some good names on the Muay Thai circuit - including a KO win over Pettachai in Thailand - and has also faced some top kickboxers, including Mike Zambidis. He maintains that Zambidis won a hometown decision in their 2012 fight. “The fight was in Greece and I think you could say that Mike got extra points for being Greek.”

Despite his background being in Muay Thai, McAllister says that the transition to kickboxing has been an easy one. “Even under Muay Thai rules I tended to fight primarily with hands and low kicks, which is really a kickboxing style anyway,” he explains.