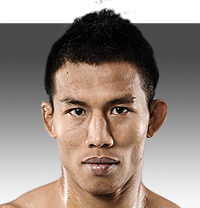 Aikpracha Meenayothin is one of the world’s top Muay Thai fighters, known for a high level of technical skill and a huge fighting heart.
Among his numerous honors are the Lumpinee Stadium belt (147lbs), one of the most prestigious titles in Muay Thai, as well as a national Thai championship title and first place in two of the esteemed World Muay Thai Council tournaments (2010, 2012).
These honors, plus his reputation as a hard-style, forward-pressure fighter who never takes a step backwards, earned him a call-up from the GLORY World Series.
Not since Buakaw Por Pramuk has there been a Muay Thai fighter from Thailand who has captured the attention of the international kickboxing audience the way Aikpracha has.
His career record includes victories over GLORY veterans such as Jordan Watson, Warren Stevelmans, Yury Bessmertny and Fabio Pinca, testament to his status as one of the world’s elite.
Aikpracha fights out of the Meenayothin Gym in Bangkok, the capital of Thailand. The team is renowned for having one of the hardest training regimens in a sport which is already notorious for hard training.
Meenayothin is one of Thailand’s top teams.
As well as Aikpracha, it also houses Rajadamnern Stadium champion Dernchonlek, two-time national champion Mondam Sor Weerapon, a former Lumpinee champion himself, and former Thai national champion Dentoranee Sor Weerapon.