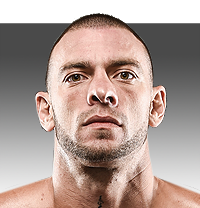 A troubled youngster, Joe Schilling was expelled from “four or five” high schools prior to achieving graduation. He says this was because he was “emotional” and was always getting into fights. At his mother’s urging he took up martial arts aged 15 and quickly realized he had found his path in life.

Starting at a Muay Thai gym in his native Ohio, Schilling threw himself into the art and went every day after school. On leaving school he trained even more, because by this point he realized this was the only thing he wanted to do with his life.

At the age of twenty he moved to Los Angeles because that seemed to him to be the epicenter of the Muay Thai and kickboxing scene in the US.

Schilling turned professional in 2006 and, despite a relatively low number of fights, has clearly established himself as one of the top fighters on the American circuit. Now signed to GLORY’s talent-packed middleweight division, he gets what he has always wanted - the chance to test himself against the best in the world.

“I’ve been vocally asking for these fights but either the promoters couldn’t make it happen or the schedules weren’t right or whatever. Now GLORY is in a position to make those fights happen and I’m really happy about that.”