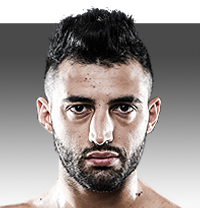 Giorgio Petrosyan is nicknamed ‘The Doctor’ for a reason - he fights with a surgical precision that no other fighter in the sport can match. Petrosyan has consistently displayed perfect timing and inhumanly fast reflexes in the course of his career.

He is far from retirement age yet already most fans and experts agree that, when he does hang up the gloves, he will be remembered as the best of all time. There is just one loss on his record, a fight against a Thai champion when he was 21 years old, and Petrosyan still bitterly disputes that result.

Petrosyan is a master of distance and counter-attack, which is why he is often declared to be kickboxing’s answer to the boxing champion Floyd Mayweather Jr. In his entire career Petrosyan has hardly ever been hit cleanly. When opponents go after him, he simply isn’t there.

Among his long list of accomplishments are first place in the 2009 and 2010 K-1 World MAX tournaments and in the 2012 GLORY Lightweight Slam Tournament. Among his many victories are wins over Robin Van Roosmalen, Artur Kyshenko, Albert Kraus, Andy Souwer and Ky Hollenbeck.