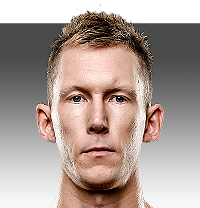 Gabriel Varga was born in Toronto, Canada and raised in what he calls “a household of martial arts” - his father was a karate instructor and began teaching him the basics of Shotokan Karate at five years old.

His formal training began at eight years old and by his late teens he was a second-degree black belt. He then took an interest in full-contact fighting and started training in Muay Thai and kickboxing, having his first fights aged 20.

Varga experienced success early and often, going 15-0 as an amateur and winning numerous titles along the way. He replicated that success as a professional; his fighting style is extremely versatile and can switch easily from playing a long-distance point-game to standing in the pocket and having heavy exchanges.

Varga had been targeted by other international kickboxing organizations but he says none of them compared to the level of challenge that the GLORY World Series presents.

“I’m really excited to be competing for the best kickboxing organization in the world.  For the past couple years, I’ve been competing against good ‘A’ class fighters, but fighting for GLORY is the opportunity I’ve dreamed of,” he says.

“I believe the featherweight division is a great weight class for very exciting and competitive fights. I’m always going in there ready to fight and in amazing condition.”