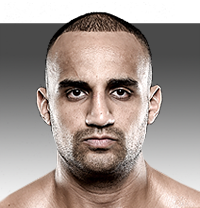 Despite being just 28 years old, Mourad Bouzidi is a one of the most experienced veterans on the GLORY roster with nearly 100 professional fights to his name. Add in his various amateur and C-class fights as a youngster and there aren’t many elite pros who have stepped between the ropes as often as he has.

Bouzidi is of Tunisian heritage but was raised in the Netherlands city of Den Haag (The Hague). He took up kickboxing at ten years old and was 13 when he had his first fight. Over the years he has faced all the top names in heavyweight kickboxing including Daniel Ghita, Gokhan Saki, Errol Zimmerman and Badr Hari.

For many years Bouzidi was coached in Amsterdam by Peter ‘The Dutch Lumberjack’ Aerts and was also his main sparring partner. In his home city of The Hague, he trained with the Kamakura Dojo under Anil Dubar, who is also the trainer of Daniel Ghita. The Kamakura Dojo is Bouzidi’s current team.

Ironically he was drawn to face Aerts - who he describes as “a living legend” - in the first stage of the GLORY Heavyweight Grand Slam 2012. Neither man wanted the fight but they put friendship aside to fight a hard first round, during which Aerts broke his right hand. The fight was stopped, Aerts exited the tournament and the two friends were saved from having to do each other further damage.

Bouzidi’s nickname ‘The Silent Power’ stems from the fact that he has a humble and self-effacing personality. Bouzidi is never to be found directing abuse at opponents or falling out of nightclubs at four in the morning during the middle of a training camp. Respectful in and out of the ring, Bouzidi’s chief pleasure away from the fight game is to be with his family.