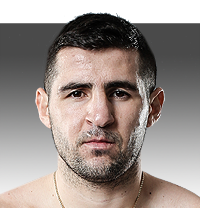 Sahak Parparyan was the middleweight champion of leading European organization Its Showtime when it was bought out by the GLORY World Series. His record meant he placed into the top three of the official GLORY world rankings and immediately added his name to the contender list in his new home.

Born in Armenia but based in the Netherlands from a young age, Parparyan fights out of Mike’s Gym in Amsterdam and counts the likes of Gokhan Saki, Murthel Groenhart and Badr Hari as stablemates. The gym has a reputation for producing hard-hitting, aggressive fighters - and Parparyan is one of them.

“Whoever has seen me fight knows that I always go forward. I am always aggressive and trying to knock the guy out. That’s my style,” he smiles.

“I want to give a show that everybody enjoys, everyone from the hardcore fans to the people who never saw it before. I want everybody to enjoy my fights so I try to put on a show.”

There is a sizeable Armenian population in the Netherlands, and also in parts of the US, due to the upheaval caused by war in their homeland. There are many professional fighters of Armenian heritage in all combat sports; Parparyan thinks that fighting is in the blood.

“All Armenians are born fighters. Our land was the first Christian country in the world, two thousand years ago, and since that time there were always other countries, our neighbours, making wars with us and trying to take us over. We never allowed that,” he explains.

“It’s been constant war for Armenia so I think it’s in our genetics. It’s important for Armenian guys to be able to protect themselves and protect their families, we take pride in it. I think that’s where the fighting spirit comes from.”