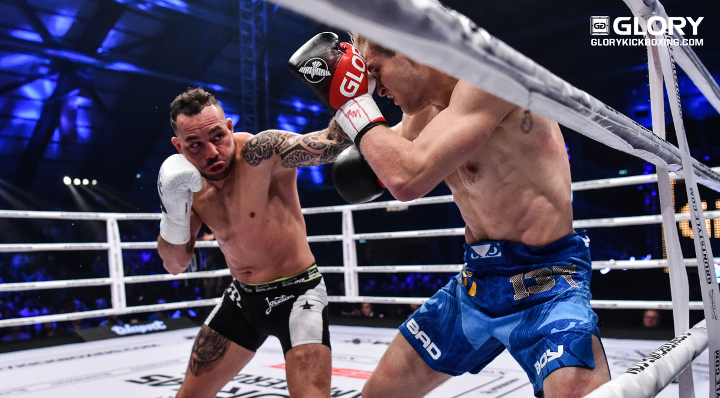 Van Roosmalen gives VanNostrand “0.01% chance” of beating him at GLORY 52

“Silver medallist” Kevin VanNostrand (17-1, 12 KO’s) has “0.01% chance” of winning the undisputed world championship at GLORY 52 LOS ANGELES later this month, according to Robin van Roosmalen (39-7, 21 KO’s)
The GLORY 52 main event is a clash of champions, as Van Roosmalen lays his world title on the line against VanNostrand’s interim title. Only one of them can walk away as the unified, undisputed world champion.
“He’s the silver medallist and I am going to keep the gold,” a cold-faced Van Roosmalen stated when asked for his expectations about the Los Angeles fight.
“I rate his chances at 0.01% because he never fought a guy like me, never fought a top-five [ranked] guy and I have as many fights in GLORY as he has as a professional.
“He is dangerous for one round, that’s it. His style is awkward - he has a scared style, he overreacts to everything. He’s all reaction. I don’t underestimate him but I think this is not going to go three rounds.”
The interim belt was created late last year when Van Roosmalen picked up an injury and notified GLORY that he would be sidelined for an indeterminate amount of time.
VanNostrand subsequently contested the belt with Anvar Boynazarov in the main event of GLORY 48 NEW YORK in December.
The fight instantly went into the record books: VanNostrand was knocked down by Boynazarov’s trademark left hook just twenty seconds into the fight, only to lift himself off the canvas and KO Boynazarov fifty seconds later.
The win earned VanNostrand the ‘Comeback of the Year 2017’ in the GLORY Kickboxing year-end awards for 2017 and also earned him this shot at the unified belt in Los Angeles.
Van Roosmalen isn’t impressed though.
“I couldn’t defend my title because of injury, so they did an interim title - for no reason, if you ask me. So they made a silver interim title for him. He’s probably happy with that because he knows he can’t get the gold. I would be happy too, if I knew that I could only get the silver.”
Van Roosmalen and VanNostrand face off in the main event of GLORY 52 LOS ANGELES on Saturday, March 31.