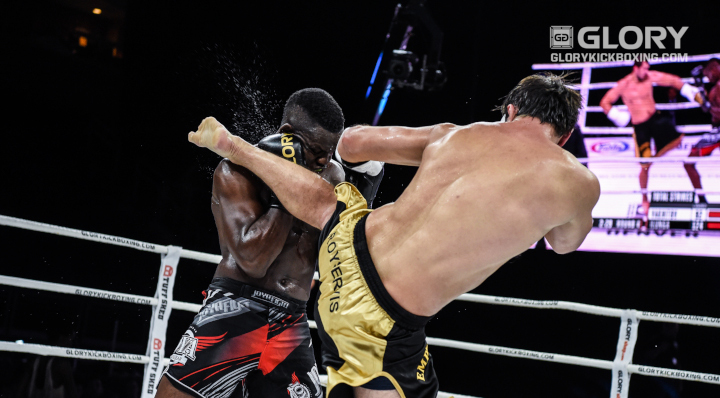 The fight marked a rematch of the pair’s match-up at GLORY 25, which Vakhitov won via decision. The Russian had not tasted in over three years entering the title defense, while Ilunga rode the momentum of back-to-back victories in the GLORY ring.

The champion marched forward initially. Ilunga countered with outside leg kicks to stay outside. The step-in knee of the challenger found the stomach of Vakhitov multiple times.

Vakhitov cracked the body of Ilunga, but was answered by a slick uppercut from the challenger. The punching exchanges became more frequent as the round progressed, but Ilunga did a good job of mixing in kicks to frustrate the champion.

Vakhitov pressured Ilunga once again in round two, but the more experienced Ilunga countered well to the body. A crisp right hand from Ilunga found its mark on the break. Vakhitov wore it well, but struggled to match the output from Ilunga. The outside leg kick to right hand combination from Ilunga landed over and over late in the frame.

Ilunga fired away in round three. Vakhitov took it and pounded his chest to encourage the challenger. The boxing of Vakhitov started to land midway through the stanza. Ilunga’s knees remained effective, but it did not slow the advance of Vakhitov.

The knees of Ilunga were relentless, but Vakhitov bit down on his mouthpiece and absorbed them. A wheel kick attempt from the champion resulted in a slip, but nothing more. A cut on the left eye of Ilunga bled slowly, but it did not impact his vision. Vakhitov scored with a body kick and a left hand just as the fourth frame expired.

Vakhitov scored with low kicks early in the final round. Ilunga continued his assault with knees, but the champion delivered punches to the body. A thundering left hook to the liver from Vakhitov drew a reaction from both the crowd and Ilunga.

The boxing combinations from Vakhitov were much cleaner in the fight’s final minute. A spinning back kick to the body from Vakhitov was the champion’s final impression on the judges.

The judges were called upon once again, returning a unanimous verdict in favor of the champion Vakhitov, who retains his lightweight heavyweight championship.