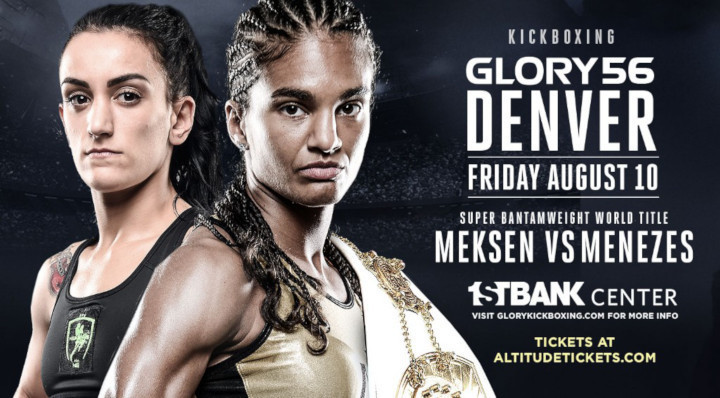 GLORY super bantamweight champion Anissa Meksen (96-3, 30 KO, fighting out of France) looks to make her second title defense and pick up her third victory of the year when she faces Brazil's Jady Menezes (12-2, 5 KO, fighting out of Brazil) at GLORY 56 Denver.

The world title bout is a rematch from GLORY 43 New York, which took place in July of last year. Their first bout – the GLORY debut for both fighters – was won by Meksen, who went on to capture the super bantamweight title and extend her GLORY record to a perfect 5-0. Menezes is out for revenge, stepping back into the GLORY ring for the first time since facing the French fighter.

Adamchuk, a former GLORY featherweight champion, and Boynazarov, a recent featherweight title challenger, met once before, with the Ukranian Adamchuk earning a unanimous decision in September of 2015.

The current GLORY 56 Denver card can be found below:

The headline bout of GLORY 56 SuperFight Series features the fourth fight between former middleweight champions Simon "The One" Marcus (48-4-2, 27 KO, fighting out of Canada) and Jason “Psycho” Wilnis (30-8-1, 8 KO, fighting out of the Netherlands), now ranked No. 2 and No. 3 in the division respectively.

Marcus holds the edge in this series, taking two decisions over Wilnis in three fights. However, the most definitive win of the series belongs to Wilnis, a TKO that earned him championship gold at GLORY 33 New Jersey in 2016.

The winner of this fourth fight will be next in line for a crack at the middleweight crown.

The current card GLORY 56 preliminary card can be found below:

Tickets for GLORY 56 Denver (including access to GLORY 56 SuperFight Series and the GLORY 56 prelims), with prices ranging $45 - $170, are on sale now and available for online purchase at altitudetickets.com or by phone at 866-461-6556.

GLORY 56 Denver will be the promotion's second event during the Summer of GLORY 2018, a five-city campaign featuring can't-miss events in New York, Denver, Shenzhen (China), Chicago and Amsterdam.