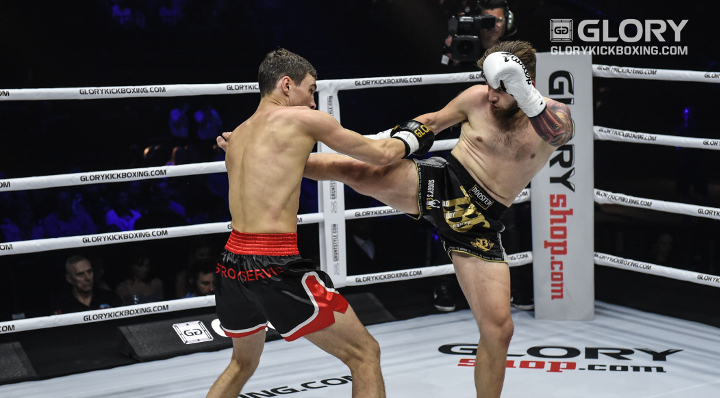 Sugden looking to quickly move past No Contest disappointment

Bailey ‘Bad Boy’ Sugden says he is “not going to stay frustrated” at the No Contest ruling in his GLORY 54 BIRMINGHAM fight with Aleksei Ulianov, despite feeling it was the wrong call.
The fight was ended at 1:10 of the second round when Ulianov sustained a deep cut over one eye.
The ringside medic determined that the cut was too deep for the fight to be allowed to continue, prompting celebrations from Sugden and his team.
But those celebrations were quickly curtailed when referee Tobias Gerold declared the fight to be a No Contest due to accidental injury.
“I won the first round, was dominating the fight, then he took me down and caused a cut on his own head [in the process] and then it was ruled a no contest,” says Sugden, now 11-2-0, 1 NC.
“But we all know - he knows, I know, everyone in the arena knows - that I won that fight. But whatever, it is what it is. We’re just ready to get back in that ring now and smash whoever is put in front of us.
“I am frustrated but I am not going to stay frustrated, because that doesn’t benefit anyone. The only person who should be pissed off is the referee for making the wrong decision.
“I don’t want him to feel bad about it but at the end of the day that’s a bad decision. [Ulianov] cut himself by taking me down and that should be a disqualification for him or a [TKO] win for me.
“But look, we are here to fight. We want a fight. Not someone taking us down and crying because they got a cut on their eye. We want a real fight.”
Asked who he would like to face when he returns to the ring - a rematch with Ulianov (now 23-5-1,1 NC) or a new opponent he has not yet faced - the young Sugden was typically forthright.
“I don’t care, I want anyone. Someone in the top ten. So all you guys in the top ten sitting at home now, better be scared, because I’m coming for every single one of you in the top ten. I’m coming, watch out!”