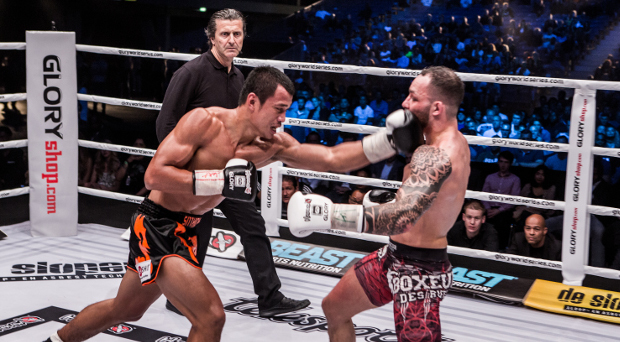 On Saturday, December 10, GLORY Kickboxing will close out 2016 with one of the biggest cards in the sport's history.

Sittichai (108-29-5, 29 KO's) won the title at GLORY 31 AMSTERDAM with a unanimous decision win over Robin van Roosmalen. He secured that title shot by winning the four-man Lightweight Contender Tournament at GLORY 28 PARIS in March.

In the semi-final of that tournament he beat former champion Davit Kiria for a second time, then progressed to the final. There he met Grigorian (46-9-2, 26 KO's), who had hammered Russian prospect Anatoly Moiseev in his own semi-final bout.

The finale was hard-fought and afterwards was declared a 'Fight of the Year' contender. Sittichai won a unanimous decision but that didn't reflect the closeness of the bout; Grigorian remained in the top contender position and still clearly a threat to the title. The December rematch will be their third meeting.

In some respects, the series between Sittichai and Grigorian echoes the recent trilogy between Nieky Holzken and Murthel Groenhart. Sittichai has won two decisions over Grigorian so far and is looking to make a clean sweep of it, while Grigorian is looking to simultaneously achieve revenge and the world championship.

Holzken ended up 3-0 over Groenhart; can Sittichai do the same over Grigorian?

This trilogy match between Sittichai and Grigorian headlines the GLORY 36 GERMANY card which forms the middle portion of the COLLISION event and airs in the US on ESPN (in other territories check local listings for details).

Immediately prior to GLORY 36 GERMANY will be the GLORY 36 SUPERFIGHT SERIES card airing live on UFC FIGHT PASS. The evening will conclude with the four-fight GLORY: COLLISION pay-per-view headlined by Rico Verhoeven and Badr Hari, priced at $29.95 and available through US providers (DISH, DirecTV, iNDemand) and digitally via UFC.tv