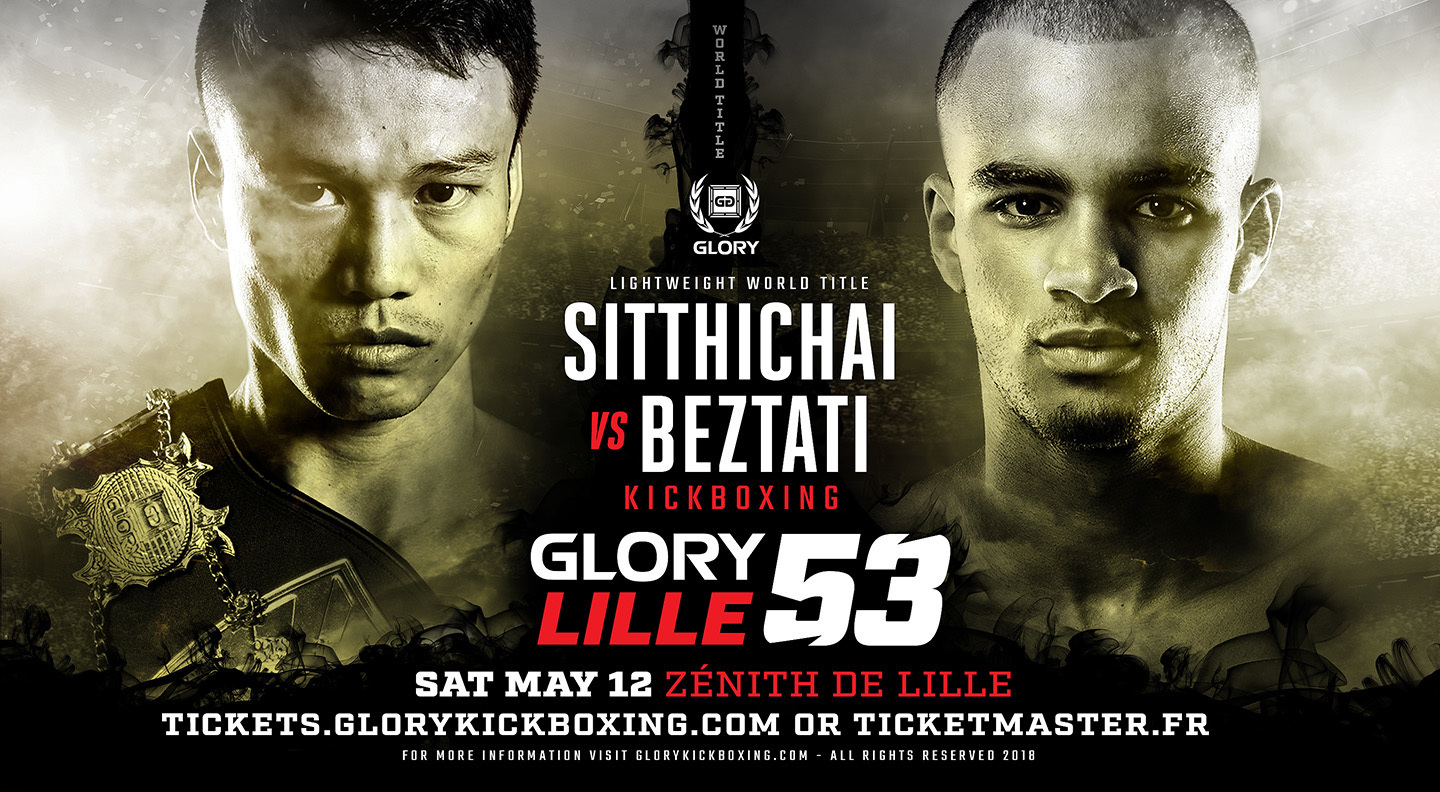 Sitthichai’s opponent is one of GLORY’s brightest young stars, as 20-year-old Tyjani “The Wonderboy” Beztati (16-2, 6 KO, fighting out of the Netherlands) looks to dethrone the dominant champion.

Since debuting at GLORY 22 Lille in 2015, Sitthichai has compiled an 8-1 record within the organization, including wins over former champions Robin van Roosmalen and Davit Kiria, as well as title contenders Marat Grigorian, Dylan Salvador and Christian Baya.

Beztati has been busy since his GLORY debut in December of 2016, fighting seven times and winning six against increasingly tough competition. The Moroccan-Dutch phenom’s most recent victory came last month at GLORY 51 SuperFight Series in Rotterdam, where he defeated Anil Cabri via TKO.

Ben Saddik and Wilnis have met once before, with the Dutch-Surinamese striker Wilnis winning by unanimous decision at GLORY 2 Brussels in 2012. Ben Saddik is coming off a memorable pay-per-view showdown with reigning heavyweight champion Rico Verhoeven in December. Winis last appeared for the promotion at GLORY 35 Nice in November of 2016.

Two bouts originally slated for GLORY 53 SuperFight Series will instead take place later in the evening during GLORY 53 Lille.

"The Professor" Petchpanomrung Kiatmookao (158-36-2, 26 KO, fighting out of Thailand) and Abdellah Ezbiri get GLORY 53 Lille started with featherweight action.

Kiatmookao is ranked No. 2 following his head-kick finish of Zougarry, a “Knockout of the Year” contender, at GLORY: Redemption in December. Ezbiri earned his No. 4 ranking by defeating both Hlali and Boynazarov during the GLORY 47 Lyon featherweight contender tournament.

Then, in a match-up that’s sure to produce fireworks, heavy-handed Zinedine “Good Boy” Hameur-Lain (57-15, 36 KO, fighting out of France) defends home turf against knockout artist Michael “Dreamcrusher” Duut (42-9, 29 KO, fighting out of the Netherlands). Hameur-Lain and Duut are the light heavyweight division’s third and fourth-ranked competitors, respectively.

The complete five-fight card for GLORY 53 Lille can be found below:

GLORY 53 Lille will be carried:

Doumbé enters the bout looking to regain his championship form against a rising prospect. Danenberg is ranked No. 5 following welterweight contender tournament wins over Jimmy Vienot and Thongchai Sitsongpeenong at GLORY 51 Rotterdam in March.

Originally scheduled to compete in the GLORY 52 Los Angeles middleweight contender tournament, No. 1-ranked Yousri Belgaroui (23-4, 11 KO, fighting out of the Netherlands) and No. 3-ranked Jason “Psycho” Wilnis (30-8-1, 8 KO, fighting out of the Netherlands) will now square off in the GLORY 53 SuperFight Series co-headline bout. The winner of this bout will earn a title shot, facing GLORY middleweight champion Alex Pereira on an upcoming fight card.

One half of the tournament bracket remains intact, as former featherweight title-holder Serhii Adamchuk (35-9, 14 KO, fighting out of Amsterdam), ranked first in the division, takes on French-Moroccan fighter Azize "The Magician" Hliali (17-14-1, 2 KO, fighting out of France).

Featherweights Anvar Boynazarov and Zakaria Zouggary have been replaced by French-born Victor “Leo” Pinto (74-28, 23 KO, fighting out of Thailand) and Turkish newcomer Buray Bozaryilmaz (38-7, 10 KO, fighting out of the Netherlands), who will meet in the other tournament semifinal bout.

The complete six-fight card for GLORY 53 SuperFight Series can be found below:

Tickets for GLORY 53 Lille and GLORY 53 SuperFight Series are on sale now and available for purchase online at tickets.glorykickboxing.com and Ticketmaster.fr, as well as Ticketmaster retail locations.